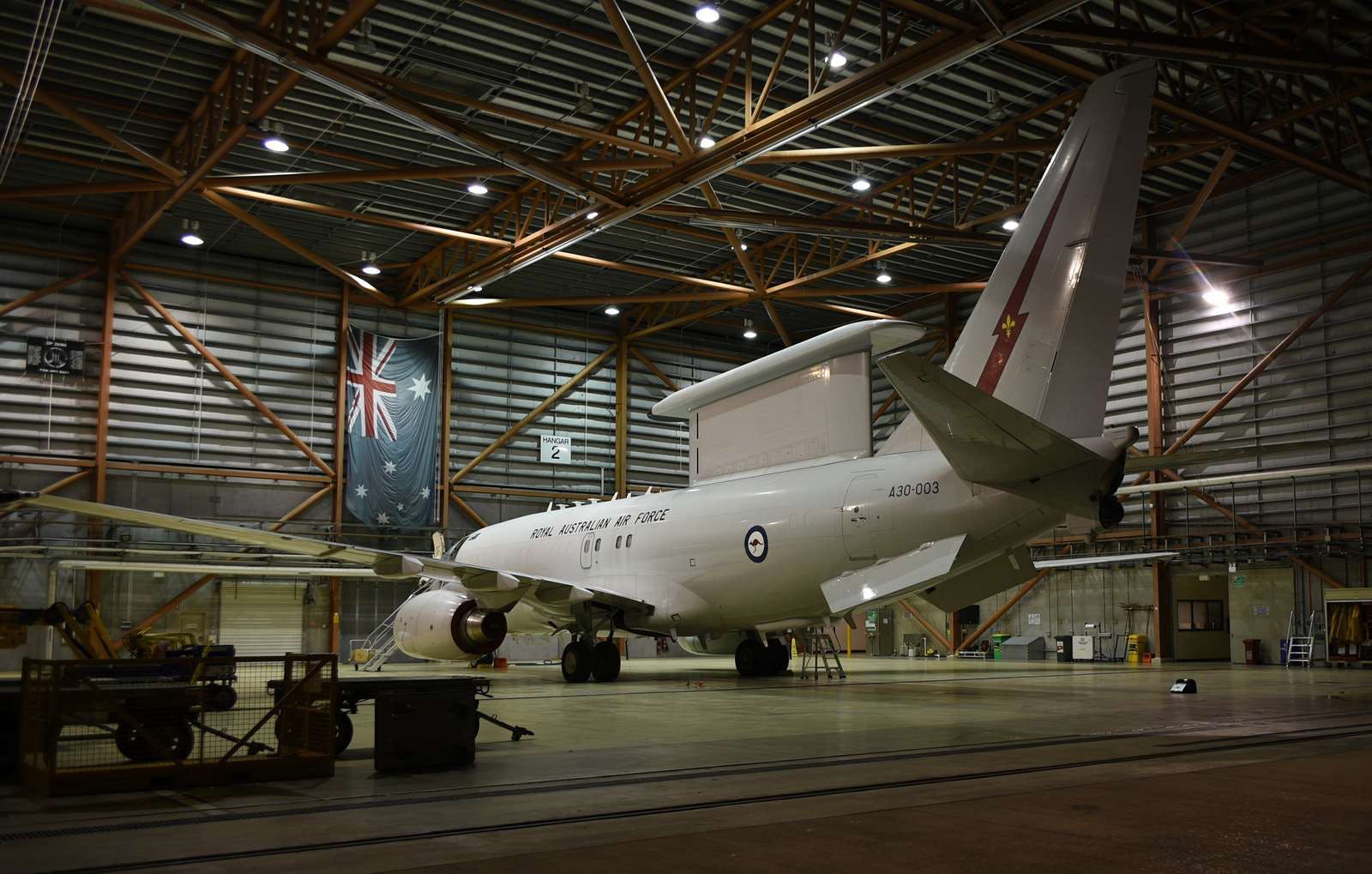 When the Alan Parsons Project sang their ultra-smoov song about the “Eye in the sky, looking at you,” they certainly could have been thinking of the E-3 Sentry AWACS (Airborne Warning and Control System) aircraft.

Ok, probably not, but the E-3 AWACS has been a game-changer on the world’s actual and potential battlefields since its adoption by the US Air Force in 1977, with its distinctive, rotating-radar “rotodome” above its fuselage, helping provide all-weather surveillance, command, control, and communications to US forces and allies.

However, though both the song and the Boeing 707-based E-3 aircraft have aged well, a national strategy that places your primary Airborne Early Warning and Control (AEW&C) capability on the backs of a (best-case) 30-year-old aircraft that’s been in continual service since the Carter administration is like doubling down and buying Eye In The Sky on 8-track in 1982, even though everyone saw the writing on the wall (8-track sales in the US peaked in 1978, but of course you already knew that).

According to the Air Force, “The Boeing [737-based] E-7 is the only platform capable of meeting the requirements for the Defense Department’s tactical battle management, command and control and moving target indication capabilities within the timeframe needed to replace the aging E-3.”

A contract award is planned in fiscal year 2023. Let’s go over some of the key points of the E-7 program.

Why are the RAF and the USAF developing and adopting the Boeing E-7 Wedgetail?

The three primary factors influencing the development and adoption of the E-7 Wedgetail are improved capability, reliability, and adaptability (to future growth and technological developments).

The E-3 Sentry AWACS system has undergone multiple upgrades throughout its lifespan, as you can imagine for a system put in service just after the Vietnam War. Over the years, the USAF and Boeing have added: ESM (electronic support measures) and an electronic surveillance capability, for both active and passive means of detection; Joint Tactical Information Distribution System (JTIDS), which provides rapid and secure communication for transmitting information, including target positions and identification data, to other friendly platforms; Global Positioning System (GPS) capability; DRAGON (for DMS Replacement of Avionics for Global Operation and Navigation); and upgrades to its main flight computer, among others.

However, like Tracy Lawrence says, time marches on, and it becomes cost-prohibitive (and difficult) to continually upgrade systems and integrations on outdated platforms when a newer, better platform is more easily adaptable and offers increased capability.

Boeing says The E-7 AEW&C “offers the most advanced, state-of-the-art airborne moving target indicator capability (AMTI) available today. . . . [The] AEW&C’s radar provides a full 360-degree surveillance capability with sector emphasis and other techniques to dynamically adjust to emerging tactical situations. Sector emphasis extends detection range without the need to fly closer to threat situations. Fully interoperable, the AEW&C brings battle management to the tactical edge of the battle space. The mission processing capability provides real-time analytics for targeting and processes critical data throughout all phases of threat engagement with little or no latency. Programmable chaff and flares operate as a defensive countermeasure against threats, increasing the aircraft’s survivability.”

The current E-3 AWACS aircraft is based on the 4-engine Boeing 707, which first flew in 1957. The first E-3 entered service in 1977, and the newest one was built way back in 1991. Now, USAF mechanics can keep crusty old airplanes flightworthy with the best of them, but in the life cycle of every long-serving aircraft you hit the point of diminishing returns.

The “Next-Generation” Boeing 737, launched in 1997, has proven one of the most reliable airliner platforms in history, with over 7,000 built.

“The reliability of the aircraft is second-to-none, really,” says RAF Squadron Leader Danny Worthington, the E-7 Programme Requirements Manager. “The E-7 is now the platform of choice when it comes to AEW&C and AWACS.”

According to Boeing, “On average, current AEW&C operators experience higher operational availability rates that allow it to spend more time in the skies. Compared to the E-3 AWACS, overall operating costs are estimated to be 66% less, and because the AEW&C has more operational capability, less (sic) jets and manpower are needed to deliver the increased capability.”

The 737 platform itself has proven exceptionally adaptable, with multiple variations. But the key component of the AEW&C system is its OMS (Open Mission Systems) architecture, which was built from the beginning to be adaptable, upgradable, and accepting of other integrated systems or future upgrades.

This built-in flexibility not only provides a technological advantage and extends the life cycle of the platform, but it reduces development costs by planning for future integrations and updates up front.

What’s the budget and timeline for implementation of the E-7 Wedgetail program?

Defense Industry Daily says “The USAF plans to award a contract in fiscal year 2023 and requested $227 million in research, development, test, and evaluation funds for the programme starting in its FY 2023 budget.”

DefenseNews says the USAF release did not say how many Wedgetails the Air Force might eventually buy, so a total budget spend is still up in the air at this point.

Turkey signed a contract for four AEW&C-capable aircraft in June, 2002, and South Korea signed up for the program in November, 2006.

In May, 2010, Australia accepted the first E-7s into its air force, and the The Australian Wedgetail fleet became Final Operationally Capable (FOC) in May, 2015.

In early 2020, the first two next-generation 737 aircraft slated to become RAF Wedgetails started the early stages of conversion in the United States.

In February, 2021, Gen. Kenneth S. Wilsbach, Commander of US Pacific Air Forces, called for the US to procure the E-7 to replace its aging E-3 Sentry AWACS fleet.

According to Aviation Week, “The Air Force expects to fund the first two prototypes in fiscal 2023 and 2024, with a production decision in 2025 and delivery in 2027.”

Boeing is confident that the E-7 program, including potential future adoption by countries other than the current Australia, United Kingdom, Turkey, South Korea, and USA, will help bolster the company’s bottom line that has recently been challenged by the fallout of the 737 Max debacle and the COVID-19 pandemic’s impact on the aerospace industry.

Mike Manazir, Boeing’s vice president for defense business development said Boeing anticipates a “stable, predictable, strong defense environment,” with the company estimating a $2.6 trillion defense outlook over the next decade, even with countries continuing to spend on pandemic response measures.

Breaking Defense reports that over the next five years, Boeing projects it could sell as much as $34 billion worth of defense and space products to customers in the Middle East alone.

Is the E-7 Wedgetail replacing the E-3 Sentry AWACS?

Yes, but not all at once. According to the Air Force, “The FY23 PB [President’s Budget] proposes a partial divestment [read: retirement] of the E-3 AWACS fleet, 15 of 31 aircraft, and redirects funding to procure and field its replacement.”

Initially, existing next-gen 737s will be converted, partially in the US, and partially by the Brits, by Boeing’s supply chain partner STS Aviation. It appears that ground-up builds of E-7s will follow, assuming no hitches in the budgetary plans.

At this time, NATO intends to extend the operational status of its E-3 AWACS until 2035 when it is due to be replaced by the Alliance Future Surveillance and Control (AFSC) program. However, with the RAF spurring the continued development and adoption of the E-7 Wedgetail, and the USAF on board, we’re betting NATO will quickly adopt the E-7, at least partially.

Time will tell. We’re just happy we have the eye in the sky, and will for the foreseeable future.