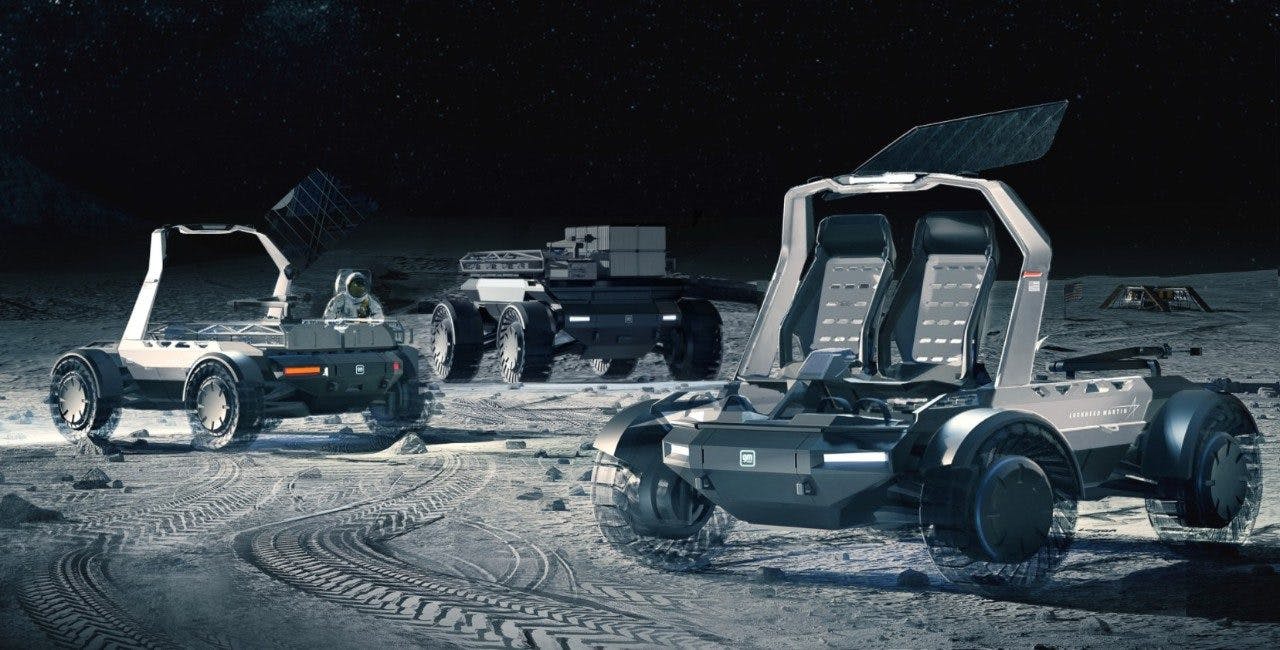 What’s cooler than walking on the Moon? Driving on the Moon. That’s right, America loves cars so much that we took the trouble of building one specifically for, and lugging one (several, actually) all the way to the Moon for Apollo 15, 16, and 17 missions. Well, as they say, everything old is new again, and since we’re going back to the Moon as part of the Artemis program, and will be spending much more time on the lunar surface, we also need an updated Moon Buggy known as the Lunar Mobility Vehicle, or LMV. NASA has put out a Request For Information (RFI) for an updated lunar rover, and who better to develop and build it than General Motors and Lockheed Martin?

Who developed the original Lunar Rover, and why?

The original Lunar Rover (officially termed the Lunar Roving Vehicle or LRV), also known as the Moon Buggy, was originally designed by rocket scientist Georg von Tiesenhausen, before being built by Boeing (with General Motors’ help on the wheels and chassis). Interestingly, the 460-pound, 10-foot-long, 3.6-foot-tall Lunar Rover reignited America’s fascination with Moon missions. See, after Apollo 11, public interest in lunar launches, landings, and rock-collecting waned quickly, even after astronauts started golfing. But when the $38M Lunar Rover was unveiled, people started paying attention again. Certainly the Moon Buggy was more than just a publicity stunt, however. There was only so much ground that astronauts could cover bouncing around the lunar surface in their space suits. The Lunar Rover expanded their ability to travel exponentially, despite its comparatively paltry 8 mph (13 kph) designed top speed. (Leadfoot astronaut Eugene Cernan recorded a maximum speed of 11.2 mph/18.0 kph, giving him the unofficial lunar land-speed record.) The three LRVs from the last Apollo missions remain on the Moon.

General Motors and Lockheed Martin are well-placed for success in their proposal for the new LMV, as both companies have experience no others can claim. TechCrunch points out, “Both companies have supplied technology for NASA missions before, including its lunar missions… GM helped develop the lunar rover that was used during the Apollo era, including its chassis and wheels. It also manufactured and integrated guidance and navigational systems for the program. Aerospace giant Lockheed Martin’s experience extends to building spacecraft and power systems that have been included on every NASA mission to Mars.”

Why does the Artemis program need a Lunar Mobility Vehicle?

The Artemis program intends to place a long-term lunar outpost on the surface near the south pole, as well as an orbiting lunar space station to facilitate exploration of the Moon, Mars, and beyond over the next decades. NASA’s Request For Information on the lunar vehicle specifies that it must last at least 10 years, and will enable a much greater level of exploration and movement than in previous visits to the moon (though even the limited range and speed of the original Moon Buggy enabled astronauts to collect 10 times the number of samples during Apollo 17 than during Apollo 11).

For valuable exploration and facilitation of supply delivery between (potentially) multiple outposts, mobility on the lunar surface is obviously a requirement, and any lunar vehicle intended for use on the Moon will need to be next-level robust, versatile, capable of handling the thermal challenges of the lunar surface, and crucially, the vehicle must be autonomous.

How is designing the new LMV rovers for Artemis different than for Apollo?

One important difference between the original Moon Buggy and the new LMV is that the LMV will be autonomous, using both AI-powered robotic technology as well as being capable of being operated remotely, for the first period of its time on the Moon. Artemis missions are both crewed and uncrewed, and not every visit to the moon includes a landing on the surface. Artemis 3, currently planned for 2025, is the first planned mission to the lunar surface, but it’s still unclear whether the LMV will be deployed as part of that mission or will come later. Regardless, the intent is for the LMV to be delivered without a crew, and conduct autonomous/remote explorations and experiments to prepare for a crewed landing at a later point.

Car and Driver reports that GM and Lockheed Martin foresee the LMV as a mostly autonomous vehicle, with humans occupying the control stick approximately one week out of the year. “The goal is to have the vehicle drive itself with minimal oversight, with the program’s chief engineer, Brent Deep, stating the LMV’s autonomous capabilities will build on the knowledge gleaned from Cruise’s self-driving vehicle technology and GM’s Super Cruise and Ultra Cruise hands-free driver-assist systems.”

An LMV capable of remaining in service on the Moon for years will have to survive incredibly intense environmental challenges and temperature swings. As CoolHunting.com explains, “Artemis is for longterm habitation on the moon, so it’s totally different than last time. For example, this rover has to live on the lunar surface and survive the night . . . . On the moon, it’s 250º F for 14 days and very bright. Then it’s dark for 14 days and it’s very cold [-298ºF]... For our lunar rover to survive the lunar night, it has to be able to hibernate and basically go dormant and survive those conditions, and then light back up. Plus, there’s lunar dust: lunar regolith is electromagnetic and it sticks to the suits and all the equipment and it’s abrasive.”

GM and Lockheed are relying on the latest post-space-age materials to achieve the strength, lightness, and durability required. The previous rovers were predominantly aluminum, but with the titanium, carbon fiber weave, and forged carbon fiber materials available now, a new level of capability and durability is possible. Even the way paint is applied and the colors chosen will help with heat-reflection requirements.

Of course the batteries used will have to be incredibly durable, capable of surviving the shocks of launch and landing, and resistant to both intense heat and incredibly cold temperatures. Car and Driver says the LMV will use a battery pack much like the so-called Ultium units GM fits in its GMC Hummer EV and upcoming Cadillac Lyriq. However, the lunar vehicle’s pack is constructed of cylindrical cells, as opposed to pouch-style ones used on Earth. “According to Deep, the cylindrical cells are better at coping with the moon’s vast temperature swings.”

While NASA’s plans include a possible pressurized rover at some point in the future, GM/Lockheed’s initial mockups are not quite so grandiose in their designs, with space atop the LMV for 2 astronauts in their space suits in an open-to-the-environment arrangement that allows for easy mounting, seating, and egress. Interestingly, the seats will be designed to fold out or be stowed flush for the initial period of autonomous use.

Jeff Nield, Director of Product and Experience, Global Industrial Design at GM, who is leading the lunar rover program, points out, “They’ll start autonomously, so the seats fold down and we want to smooth the deck and they’ll function like that for an extended period of time. Then once everything’s set up, it activates into a driven vehicle. It’s kind of interesting, it almost goes in reverse order: it doesn’t evolve into autonomy, it goes the other way. But then it’ll still have autonomous capability.”

What’s it like to drive on the surface of the Moon?

General Motors asked the original Apollo astronauts to weigh in on the driving experience during the lunar missions to gain perspective, tune the suspension, develop the wheels/tires, and better understand the problems they’re facing. Jeff Vogt, the advanced program lead for vehicle dynamics at General Motors, told Popular Science, “Driving on the moon is like driving on ice. If you can imagine the worst ice storm ever, that is what it is like.”

Ars Technica points out, “The terrain is an electrostatically charged regolith of metal and glass; a fine dust of asteroid pieces that is like silt that attaches to absolutely everything, and if gets into your electronics can cause some major issues. With Lockheed’s help, GM was able to re-create the surface of the Moon and its sharp, menacing dust.”

Of course, all of these issues are compounded by the fact that the Moon’s gravity is one-sixth that of Earth. So even though the LMV weighs around 1,500 kilograms on Earth, on the Moon it’s much lighter, which further reduces traction on the slippery, dusty surface. Suspension settings, tire/wheel rebound, and steering all need to be developed and calibrated with an extremely problematic surface environment factored in, along with the ⅙ gravity component.

Speed will need to be kept relatively low for safety as well, because what might be a speed bump on Earth could potentially launch the LMV into a huge uncontrolled jump in that low-gravity environment.

However, we’re sure that somewhere at GM there’s an engineer figuring out how to program a hidden setting into the LMV to allow the first burnout on the Moon. And as there will eventually be more than one LMV on the lunar surface, we’re betting at some point there’s going to be a drag race. First one to mare insularum wins!