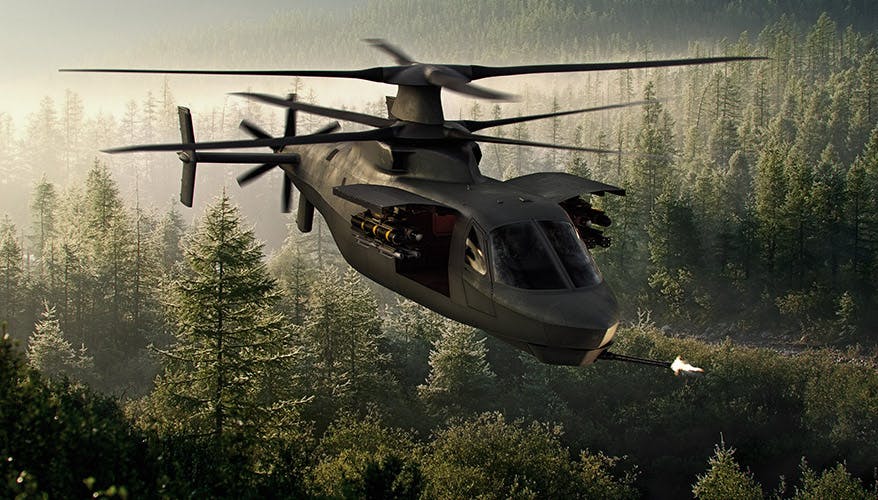 You know what’s cool? A small military reconnaissance aircraft that can stealthily penetrate enemy defenses, hover quietly, and maneuver in and around tight spaces in urban, mountain, desert, or jungle environments.

What’s even cooler than that? One that can do all of the above, plus fly really far, really fast, and blow crap up! This is the basic premise behind the Future Attack Reconnaissance Aircraft (FARA) program, which was initiated in 2018 and is currently in its final development trials, with two prototype designs set for government flight evaluations around the end of 2023.

Let’s go over the history of the FARA concept and the key points of the program so far.

While many military weapons-system development programs are the result of collaborations between branches (or even between governments, like the Joint Strike Fighter program), the Future Attack Reconnaissance Aircraft program is all U.S. Army.

The Army has had a torrid love affair with the helicopter ever since June 1965, when the Army received Department of Defense authorization to organize (or technically reorganize) the First Cavalry Division as “air cav” (Airmobile). This transition to the heavy use of helicopters as transport, recon, and attack aircraft is memorialized in Joe Galloway and Hal Moore’s book, We Were Soldiers Once… and Young (go read it) and in the 2002 Mel Gibson movie We Were Soldiers (go watch it).

The tactical success of the rotary-winged aircraft in Vietnam cemented its place in history, and the versatile “armed reconnaissance aircraft” is still viewed by many army commanders as an essential military tool.

However, the Army’s Bell OH-58 Kiowa scout helicopter platform was getting haggard (it was retired in 2014) and the Army has been looking for a replacement, one with increased capabilities, range, lethality, stealth, and badassery.

To take it straight from the cavalry horse’s mouth, so to speak, “The FARA weapon system is designed to restore attack reconnaissance dominance with sweeping improvements in lethality, agility, reach, survivability, and sustainability to provide capability and flexibility to future commanders. FARA will mitigate enemy long-range capabilities through increased reach allowing the commander to fight and operate from relative sanctuary while delivering lethal effects outside enemy sensor/weapons range. FARA must operate in complex and dense urban, mountainous, desert, jungle and maritime environments.” (per army.mil)

FARA and ITEP: the search for better performance in “hot and high” conditions

The FARA program could be said to be a result of, or at least it grew in conjunction with, the Improved Turbine Engine Program (ITEP). In an attempt to lower purchase and maintenance costs, increase performance in “hot and high” conditions (like Afghanistan), and increase fuel economy and range, in around 2006 the US Army sought development of a replacement for the turbine engine that has powered its UH-60 Black Hawk and AH-64 Apache helicopters (or what military aircraft geeks sometimes call “rotorcraft”) for decades.

Why are hot and high conditions difficult for helicopters to deal with? Because the hotter the air is, the less dense it becomes. Since we haven’t yet discovered antigravity, aviation still relies on air pressure and the lift provided by wings passing through air. And of course, the higher you go, the less air there is. Less-dense air = less lift. Due to their versatile rotary-wing design, helicopters don’t fly fast enough to benefit much from high-speed compression of air into jet engines to make more power at high elevations, so they can falter in hotter, dryer climates and at higher locales.

As you add complexity, additional recon equipment, weapons systems, or larger fuel tanks (to try to increase range), you also add weight, which means helicopter turbine performance must be increased to keep up.

Since the ITEP’s efficiency, range, and performance goals were lofty (see what we did there?) – the stated 3,000 shaft-horsepower goal represented a 50% increase over the most powerful previous turbine variant–they also required upgrades to future aircrafts’ gearboxes, transmissions, rotor blades, and tail rotors (if any).

These necessary upgrades were so profound that it became obvious that attempts to modernize existing designs wasn’t going to cut it, and so the FARA was born in 2018.

To make things even more difficult, the maximum dimensions specified for FARA entries were not to exceed 40 feet (about 12 meters) for both rotor diameter and fuselage width. So entrants needed to pack lots of performance in a relatively small package (hey, that’s exactly what Intergalactic does in thermal management!).

What is the timeline and budget for the FARA (Future Attack Reconnaissance Aircraft) program?

As noted above, the OH-58 platform was retired in 2014, and budget cuts prevented the Army’s efforts to extend or reinvigorate the Kiowa program. Since then, the Army has used AH-64 Apache attack helicopters along with AAI RQ-7 Shadow drones to fill the gap in the armed reconnaissance role.

For various reasons, three prior attempts to develop the OH-58’s successor were canceled prior to reaching the production stage. Since the Army still saw the need for an upgraded attack/reconnaissance rotary-winged aircraft, on October 3, 2018, the Army formally began the FARA program to develop a worthy successor to the OH-58 Kiowa scout helicopter as part of the Future Vertical Lift program.

In April 2019, the Army gave $15 million each to five manufacturers for the first development phase: Sikorsky, Bell, Boeing, Karem, and AVX/L3.

Around a year later, in March 2020, the US Army announced finalists Bell and Sikorsky as the “winners” of the development trial portion, and gave each company $735 million to develop flying prototypes for a flight test evaluation of the two finalists’ aircrafts to take place no later than the fall of 2023.

The Army was able to find “creative ways to absorb the cut,” and the FARA program is still on track to see the results of Bell’s and Sikorsky’s efforts by the end of next year.

What are the two final designs in the FARA development program?

Bell’s final prototype entry will likely be a refinement of its 360 Invictus FARA candidate design, a 2-seat, single-rotor helicopter with a ducted tail rotor.

Sikorsky’s Raider X design is much more “futuristic,” with a side-by-side 2-seat fuselage, “stacked” compound coaxial main rotors to negate the need for a tail rotor, and a “pusher” propeller at the rear for additional forward speed.

Both appear to have the capability for multifunctional weapons delivery systems as well as a 20mm cannon, though that last item may or may not materialize due to the budget cuts mentioned above. Still, rumor is that Northrop Grumman's crazy Sky Viper chain gun is a candidate for FARA.

Since the dot-gov throwing a bunch of money at aircraft manufacturers in attempts to push the performance envelope has historically resulted in some seriously kickass flying machines, we can’t wait to see what the FARA finalists come up with!