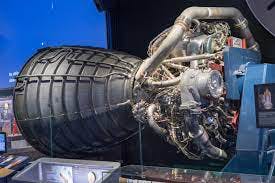 If you locked a bunch of marketing consultants in a room, asked them to come up with a name for a new multifaceted aerospace technology company, and fed them a lot of cheese danish and stale coffee, they might eventually come up with a name like “Rocket-Jet Aero-Speed,” or “Aero-Zoom Spacey-Jet, Incorporated,” or maybe even “NozzleLaunch Zoomy-Splode, Unlimited!”

As it happens, through a series of mergers and other corporate maneuvering, we ended up with Aerojet Rocketdyne. Though their name may sound like it belongs on the side of Duck Dodgers’ spaceship (in the 24½th Century!), they’re a serious player in the aerospace industry that has been kicking butt and taking slightly silly names in their current form since 2013—but the story of this firm goes back waaaay farther than that. Let’s go over the guts of this aerospace and defense industry powerhouse, and learn why they’re a space force to be reckoned with.

A brief history of Aerojet Rocketdyne: An earth-bound tire company lifts off into aerospace

When asking “what does Aerojet Rocketdyne do?” it might save time to list things the diverse company doesn’t do, or hasn’t dabbled in over its 100+ year history. The company that would eventually become Aerojet Rocketdyne was founded in 1915 in Akron Ohio by William F. O’Neill as General Tire & Rubber Company. The business grew slowly in a very crowded tire/rubber market (there were 380 American tire companies at the time) by focusing on premium offerings and innovative products. A solid marketing strategy helped the business survive the rubber shortages of World War I and the economic downturn of the 20s and 30s.

Diversifying into the acquisition of AM radio (and later FM and TV) broadcasting stations may have seemed strange for a tire and rubber company, but this move helped solidify marketing strategies and legitimize the company for investors and future partners. By 1938 Army and Navy aircraft used General tires, a fact which the company touted in its advertising. Then, as now, if you can get an “in” with the military aviation/aerospace program, you can benefit from tasty defense spending and government contracts.

During WWII, the company, like many others, was firmly committed to the war effort and used its facilities and production lines to manufacture diverse products needed by the military. The company built a new factory in Mississippi to produce munitions, and built 500-pound bombs in a factory in Indiana. In another factory, workers produced rubber pontoons that could be lashed together to form floating bridges for heavy equipment and infantry. They also manufactured gas masks, barrage balloons, decoy landing craft, life preservers, and raincoats. Despite severe rubber shortages, General Tire built an additional tire production facility in Texas to keep up with the government’s needs.

The most dramatic diversification, however, and a hint at its future industry presence in the rocket and space exploration market, was General Tire’s acquisition of Aerojet Engineering Corporation in 1945. Aerojet was a small rocket development firm with roots in the California Institute of Technology. Since 1938, the group had been working under a US Army contract to develop jet-assisted takeoff (JATO) rockets for military aircraft. General Tire formally incorporated Aerojet in 1942 and began producing thousands of JATO units for military planes. JATO technology halved the distance needed for airplanes to take off, either from short runways or aircraft carrier decks.

After World War II, Aerojet continued to develop solid rocket propulsion systems (including JATO and sounding rockets), many of them powering military missiles. One prominent example is the motor that propelled the first mobile, medium-range, guided anti-aircraft missile, the Homing All the Way Killer (HAWK) system beginning in 1959. Variations of the surface-to-air HAWK missile have been used by US and allied military forces ever since, and Aerojet has been the sole supplier of HAWK rocket motors. Beginning in 1958, Aerojet also developed the Mark 46 torpedo for the Navy, delivering 20 demonstration units in 1960, and eventually delivering more than 5,500 Mark 46es. This success spurred growth in the company’s Undersea Systems Division, which developed several other undersea vehicles, mini submarines, swimmer delivery vehicles, and underwater propulsion systems in the last half of the 20th century.

Over the years, the business branched out and bought movie corporations, hotels, wallpaper/decoration firms, tennis ball makers, and even a Pepsi bottling company, but toward the later part of the 20th century, the company had moved further into the military/space exploration arena and phased out of the tire business and most of their other ventures. Despite becoming the 5th largest American tire maker in 1981, by 1984 General Tire evolved into a holding company, GenCorp Inc., which fully exited the tire business in 1987 to focus mainly on high-technology design and production in the defense and space industries (including solar arrays and related technology for spacecraft). After a key acquisition of Pratt & Whitney Rocketdyne in 2013, the company changed its name again to Aerojet Rocketdyne Holdings, Inc. in 2015.

Lockheed Martin announced plans to take over Aerojet Rocketdyne on December 20, 2020 as part of a $4.4 billion acquisition, but this plan was abandoned by Lockheed on February 13, 2022 after opposition from Raytheon led the FTC to block the acquisition due to concerns about anti-competition regulations. If you get the attention of companies like Lockheed Martin and Raytheon, you know you’re playing with the big boys in defense and aerospace.

This is by no means an exhaustive inventory, but here’s a sample playlist of Aerojet Rocketdyne’s greatest rocket hits (see what we did there?):

If you still don’t believe Aerojet Rocketdyne takes their name, and their aerospace and rocket technology, very seriously, check out the URL for their website: Rocket.com. You can almost hear them saying, “Damn straight, we make rockets now. Get used to it. You need a rocket? You know where to come.”