What is digital twin engineering and why is it vital in modern aerospace? 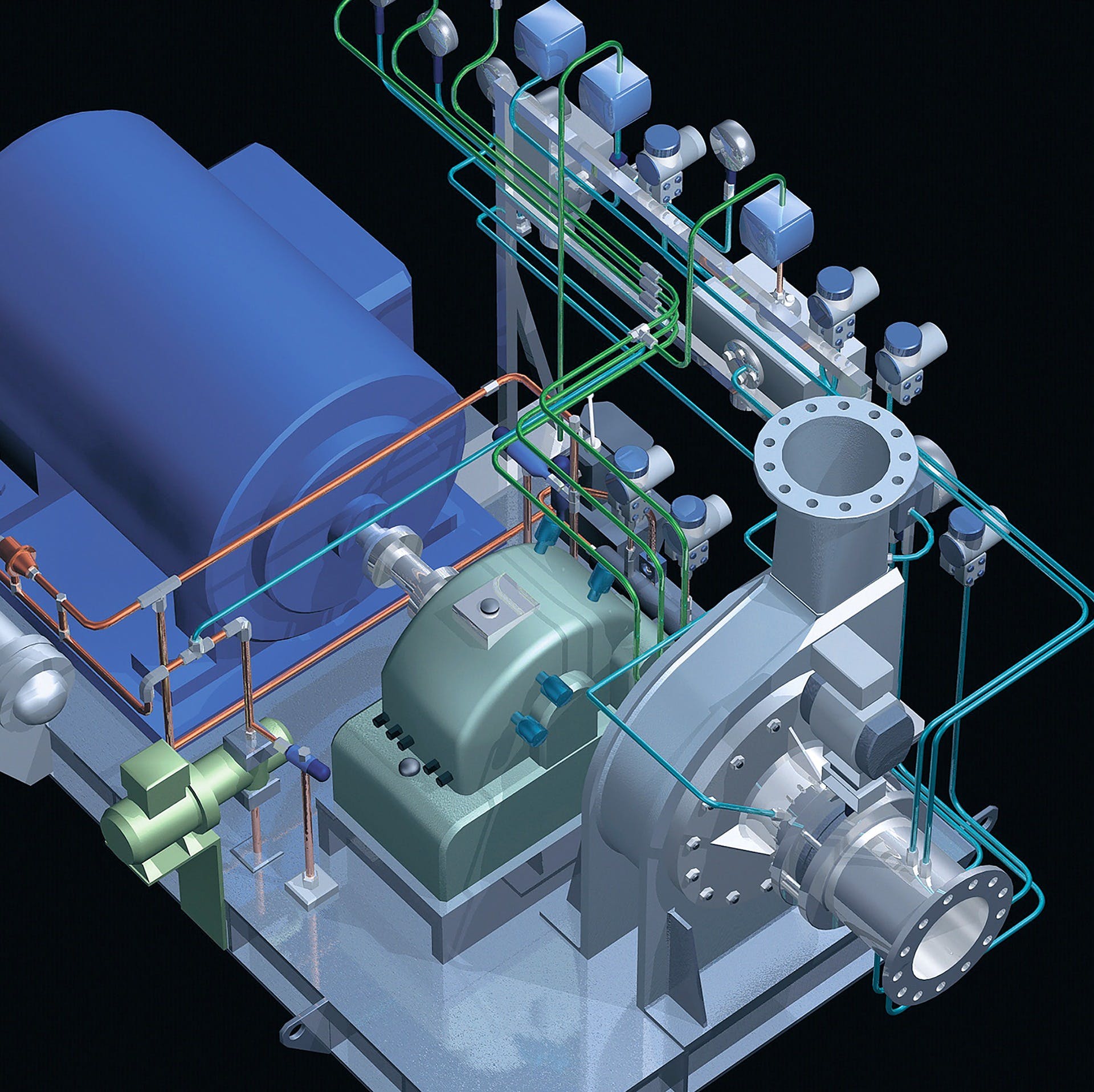 Virtual reality is a term with its origins in the mid-1980s, and has come to mean many things over the past decades. However, from The Matrix, to The Sims, to the Avatar movies, to the Oasis from Ready Player One, to Zuckerberg’s “social metaverse” (Mark, stop trying to make Meta happen. It’s not going to happen), the concept is similar.

At its core, creating something digitally, or virtually, that behaves exactly like it does in real life has been a key goal for everyone from video game companies to brain surgeons to the most advanced engineers in product development, civil planning, environmental science, aerospace, and more. Over the past few years, advances in computer software and hardware have allowed great strides forward in this technology, and designers, engineers, and manufacturers are benefitting from this linking of a virtual design and its real-life version, or “twin,” along with the connected data that makes it valuable.

Let’s go over the concept of digital twins as it relates to design, engineering, and manufacturing in today’s aerospace market, and see if we can shed some light on this new trend.

What is a digital twin?

Digital twin engineering, often referred to as “digital twins,” in very simple terms, is the ability to create a highly accurate, virtual representation of how both the elements and the dynamics of a machine, component, asset, system, process, or device operate and work. A digital twin is much more than even the most accurate, detailed digital or physical blueprint or schematic. When created correctly, a digital twin will inform and influence all aspects of how an aerospace vehicle, device, system, process, or component is designed, built, and operated throughout its life cycle in a realistic environment.

The reason the concept is known as “digital twins” is because there is eventually both a physical object, device, craft, or component, as well as its virtual or digital representation (or digital twin), and each informs and interacts with the other via the crucial third part of the equation, which is the data or knowledge transfer between the virtual and physical twins and the engineers, designers, and manufacturers running the process.

IBM says the term “digital twin” was coined by NASA in 2010, but points out that “the core idea of using a digital twin as a means of studying a physical object can actually be witnessed much earlier. In fact, it can be rightfully said that NASA pioneered the use of digital twin technology during its space exploration missions of the 1960s, when each voyaging spacecraft was exactly replicated in an earthbound version that was used for study and simulation purposes by NASA personnel serving on flight crews.”

Benefits of digital twins, and why this technology is key to US military aerospace development

Despite what you may read in the news, the US military often moves quickly and works hard to remain at the forefront of new technologies, systems, and methods. Like many other organizations, the world’s foremost militaries have seen the benefits of employing digital twin models for development and analysis of new tech, weapons, vehicles, and more. Let’s go over some of the primary benefits of digital twins in a military and/or aerospace context.

As the American Institute of Aeronautics and Astronautics explains, a primary value of the digital twin is that it creates the ability to shift necessary work from a physical environment into a virtual or digital environment, and facilitates the capability to predict conditions in the future, or in situations where evaluation is physically not desirable, by analysis and testing using the digital model. This approach results in significant decreases in the resources needed to design, produce, and keep aerospace products and components operational throughout their lifecycle, when compared to “legacy” development philosophies.

In a military and/or aerospace market where every penny is pinched and every minute of work is scrutinized (and billed), if you can achieve significant decreases in costs, time, and resources while achieving the same or improved milestones, it’s a win-win for everyone involved.

Increased speed of development and production

Since much of the crucial work of development, prototyping, and testing can be shared between physical and digital twins, or in some cases performed entirely using the digital model, development and production can be accelerated and becomes less costly. AIAA’s report cites examples of a 50% percent reduction in material development time, up to an 8x reduction in testing, and a 10-75% reduction in cycle time when the digital twin model is employed.

It’s important to note that the digital twin approach doesn’t just apply to the doohickey itself (for lack of a better term), but also to all the systems, machines, warehouses, assembly lines, supply chains, technologies, and even workforces related to the manufacture of said doohickey. With digital twin analysis of machines, tools, and processes, it’s possible to achieve better tolerances, longer component life, more efficient manufacturing methods, and more correct predictive manufacturing outcomes relating to the doohickey you’re building.

Additionally, this improved efficiency enables faster iterations in response to customer feedback, which keeps clients happy and increases the speed of the final product evaluation and approval process.

Improvement of the actual product performance, as well as future versions

The data obtained via coordinated testing and evaluation of a set of physical and virtual twins can allow for important lessons to be learned, which may result in recalibrations, adjustments in operating parameters, and/or improvements in materials and designs based on the real-time and virtual aging or lifecycle of the product or component.

By capturing this key data throughout a product’s lifecycle and making the data available in an easy-to-utilize form to designers, the next version of the product, part, or subsystem can be improved based on the lessons learned from data collected during previous iterations.

Assuming the appropriate interfaces and data sets are in place, using digital twins, it becomes possible to perform highly realistic and informative virtual testing of components and systems and change key variables without the expense of first producing them or attempting to interconnect them in real life. Theoretically, to give a very simple example, it is possible for the Navy to virtually “install” the digital twin of a particular hydraulic pump, perhaps developed by NATO, into the digital twin of an F/A-18 Super Hornet and evaluate nearly every function and any resulting performance gains before ever asking for a physical part to be shipped for evaluation. This can lead to obvious improvements in development speed, reductions in cost, and improved technologies for all connected organizations.

Limitations of and difficulties with digital twin engineering

By now, you may be completely sold, and ready to adopt the digital twins approach to everything from a super-light aerospace microtube heat exchanger to your child’s potty training schedule. Well, not so fast, bub. Though digital twins are here to stay and have numerous benefits, it’s not all beer and skittles, as my grandpappy used to say. Let’s go over some of the limitations and difficulties related to the digital twin approach.

Intensive analytics and vetting of data are required at every step

Think about how much effort it would be to create an accurate, dynamic, reactive, and functional digital twin of something that seems relatively simple, like an electric ventilation fan for an aircraft’s cabin. Now imagine applying that same principle and consider the amount of data involved with creating a useful digital twin of an entire aircraft or space vehicle with all its interconnected systems and components. It’s simply a staggering amount of data and requires highly sophisticated and powerful computer systems and software to operate. The old GIGO (garbage in, garbage out) computer programmer’s axiom certainly applies here, as the digital twin will only be as useful and as accurate as the information used to create it.

Machine learning and detailed simulation software have helped make digital twins possible, but you still need to check and recheck all your assumptions and data at multiple points along the line. It can be tempting, when the virtual performance of the virtual gizmo doesn’t align with the actual performance of the actual gizmo, to doubt reality and insist that the digital version must be accurate, and that reality has got it wrong, as Douglas Adams said.

Part of the beauty of the digital twin is that you can theoretically “plug and play” with other systems, organizations, or technology, as long as the interface and the data is all in a compatible format. This isn’t always the case, and there’s no real universal code language that everyone can agree on, even today. This can create potential problems when trying to develop or refine intercompany, interagency, or international aerospace products.

Furthermore, in some cases, it may not be desirable for a classified/proprietary doodad to have its digital twin available for virtual testing, and if that digital twin is leaked or stolen, it can be essentially the same as stealing the real-life doodad, since digital twins are becoming so accurate. So, data security becomes an even more vital priority where national-security-related items are “twinned.”

Just because an organization invests whole-hog in the digital twins model for development, engineering, and manufacturing, that doesn’t mean that everything now happens virtually. As AIAA points out, “The Digital Twin does not eliminate the need for physical measurements and testing, but only reduces the number and dependency on this form of information.” So don’t throw away your soldering irons and 3D printers just yet.

So, while digital twins have some sticking points, the concept is likely here to stay. As far as virtual reality, MarketingWeek says “The metaverse is a naïve joke, its hype and expectations are about to crumble, but the idea of a world where the internet and reality are one is key.” On the other hand, where digital twins are concerned, we are already to the point where reality and virtual/digital engineering “are one,” and this brave new virtual/physical hybrid engineering model will only grow in adoption and capabilities in the coming years.