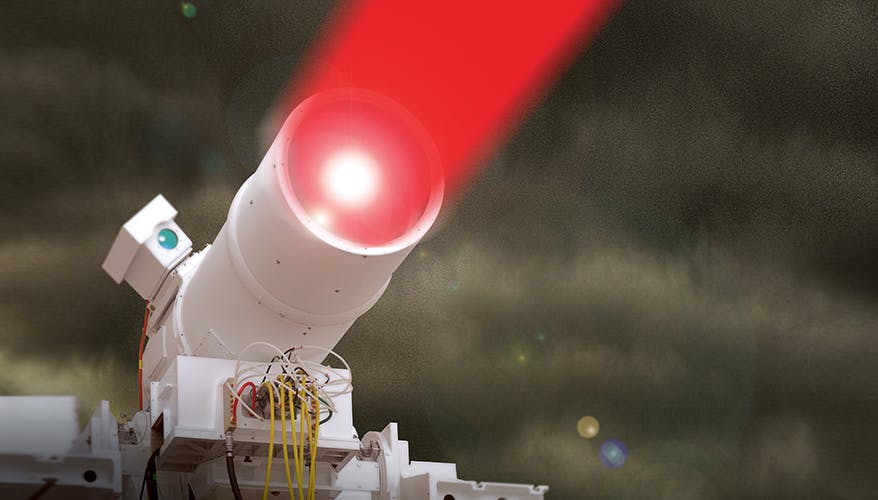 Let’s jump right in: Lasers are frickin’ cool. Or rather, they’re frickin’ hot. The uses of Light Amplification by the Stimulated Emission of Radiation technology have been speculated about since Einstein’s musings of the 1920s in a theoretical sense, and since the 1950s in a Bradbury-space-ray, science-fiction sense. But modern uses of the laser are extremely varied and of great benefit to humanity.

However, while the tactical, military use of “directed energy” weapons systems (particularly those with a high-powered laser at their core) is also not a new concept, the real-world application of them is.

What are directed-energy weapons?

Future-tech directed-energy systems like the “Operation Crossbow” high-powered laser weapon depicted in Real Genius (1985) and the WAMP laser-powered anti-ballistic-missile system depicted in Spies Like Us (1985), not to mention the laser superweapons used in pretty much every James Bond movie ever, have been made to seem commonplace in military (or supervillain) hands, but only recently have functional, directed-energy laser weapons systems been entered into real-life tactical use.

As we reported in our article on the Next-Gen Jammer program, technically, the use of “directed energy,” or the tactical use of the electromagnetic spectrum to control the battlefield, attack an enemy’s assets, or slow or prevent enemy attacks, goes back to the early 20th century during the Russo-Japanese war of 1904-1905, where a Russian ship captain attempted to overpower a Japanese “wireless” (radio) transmission regarding the location of their fleet by requesting permission to broadcast a stronger signal. Furthermore, in World War II, directed radar beams were used both to guide and disrupt the navigation of Allied bombers.

However, when someone uses the term “directed energy weapons” today, they are most likely thinking of laser-based or possibly high-powered microwave weapons systems.

In a Congressional Research Service report to Congress in September 2021, we are given (unclassified) background information about our military’s development of directed-energy (DE) weapons, “including high-energy lasers (HELs) and high-powered microwave (HPM) weapons.”

What are the advantages and potential uses of directed-energy weapons?

The CRS report points out some of the benefits of tactical use of DE weapons: “If successfully fielded, HELs could be used by ground forces in a range of missions, including short-range air defense (SHORAD); counter-unmanned aircraft systems (C-UAS); and counter-rocket, artillery, and mortar (C-RAM) missions. HPM weapons could provide a nonkinetic means of disabling adversary electronics and communications systems.”

(Incidentally, “deeper magazines” refers to the ability to deploy or fire a DE weapon independent of a limited magazine of ammunition, which practically all “kinetic” weapons rely on.)

A 2017 CNN video report of the Navy’s “first-ever active laser weapon” shows a directed-energy weapon shooting down an airborne drone. The Navy lieutenant operating the system points out, “[The laser weapon system] operates in an invisible part of the electromagnetic spectrum. You don’t see the beam. It doesn’t make any sound. . . . And it’s incredibly effective at what it does.”

The report earlier echoes the low-cost benefits of this type of DE weapons system, estimating that the Navy’s version costs “about a dollar a shot.”

What are the limitations or disadvantages of directed-energy weapons?

DE weapons could, however, face a number of limitations not faced by their kinetic counterparts. “For example, atmospheric conditions (e.g., rain, fog, obscurants) could potentially limit the range and beam quality of DE weapons, in turn reducing their effectiveness,” says the CRS report.

Additionally, DE weapons typically generate a lot of heat, and are therefore practically limited by how effective their thermal management systems are.

Is the US military currently deploying directed-energy weapons?

Ever since Townes, Shawlow, and (eventually) Gould received patent rights for the concept of the laser, which was first developed into a working prototype by Theodore Maiman at Hughes Aircraft Company (yes, that Hughes Aircraft Company), you can be confident that someone, somewhere was thinking hard about ways this new technology could be turned into a practical weapon, and humanity accomplished this formerly sci-fi feat starting around the mid-20-teens.

“Today the laser is intended primarily to disable or destroy aircraft and small boats,” says the 2017 CNN report. If CNN is reporting it on national and international television and internet news networks, you can be confident that the military is likely several generations ahead on developing directed-energy weapons capable of greater range, accuracy, and power. And remember, that was over 5 years ago.

In June 2021, Raytheon reported they had more than 4,000 operational hours on their ground-vehicle-mounted High Energy Laser Weapon System (HELWS), that it had been certified for use in combat, and had been deployed overseas.

However, recently, most of the industry buzz regarding directed-energy-weapons has been that surrounding the AHEL system.

What is the AHEL Airborne High Energy Laser system?

The Airborne High Energy Laser, or AHEL is a directed energy weapon system designed to be mounted on airborne vehicles for neutralizing ground emplacements, vehicles, or other airborne targets, and brings us closer to the “star wars” laser systems depicted in those 80s movies mentioned above.

In October 2021, the US Air Force took delivery of the first prototype of the Airborne High Energy Laser, or AHEL. Lockheed Martin said the laser system has since entered a phase of integration with other systems (likely a beam-guidance and targeting system at a minimum) in preparation for ground testing and ultimately flight testing aboard the AC-130J Ghostrider gunship.

Since both the aircraft and potentially any targets may be in motion in different directions at significant speeds, this system requires advanced target-tracking and beam-direction capabilities to allow the necessary “time on target” for a directed energy laser to be effective at neutralizing threats.

Globalsecurity.org posits that the directed-energy weapons capability of the AHEL “may offer possible tactical and operational advantages over conventional capabilities for certain missions requiring clandestine activities and the ability to disable vehicles, infrastructure, weapons, and individual people. Such capabilities may also offer advantages in terms of cost effectiveness, sustainability, precision and deniability.”

Whether the current technology is capable of incinerating a terrorist drug lord from space or cooking an oversized batch of popcorn from an airborne bomber is unclear, but we’d wager we’re not too far from making that a reality.