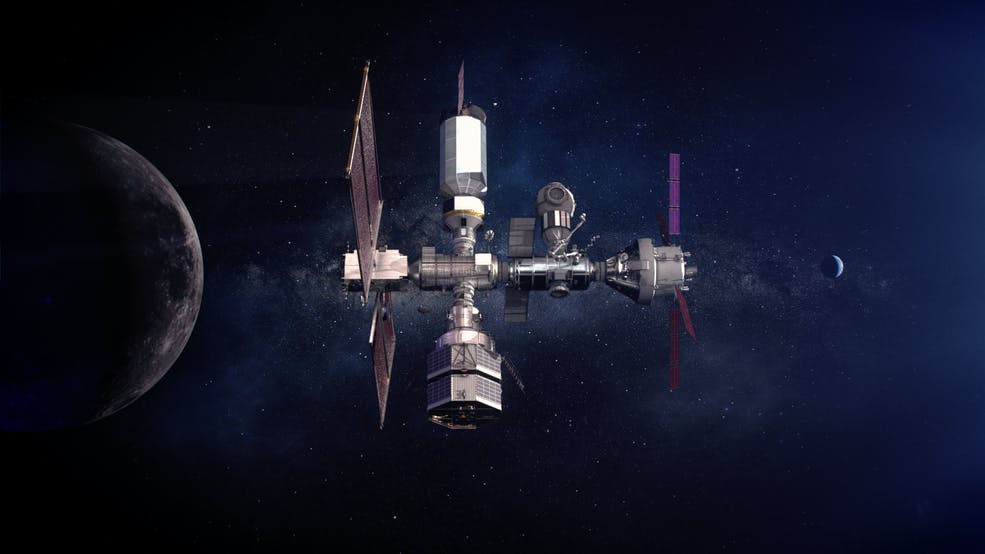 When someone brings up the topic of space exploration, what do you think of? We, like Zaphod Beeblebrox, think of excitement and adventure and really wild things! Rocketships! Space orbiters! Moon rocks! Fire! The infinite blackness of space! Brave human beings risking their lives for the pure joy of exploration! Lawsuits! Delays! Wait… what?

Join us on a journey through everything we currently know about NASA’s vaunted Lunar Gateway Program.

What is the Lunar Gateway Program from NASA?

The Lunar Gateway is a primary component of NASA's Artemis program (fun fact: in Greek mythology, Artemis is sister to Apollo, which is the namesake of NASA’s first lunar program). Artemis intends to establish a long-term base on the Moon (Artemis base), and the Lunar Gateway will serve as a multi-purpose outpost that orbits the Moon. From the Gateway, NASA and international partners can provide essential support for long-term human presence on the lunar surface, as well as launching additional missions for deep space exploration.

Various countries will be contributing different “modules” to the Gateway orbiter: NASA will provide the power and propulsion element (PPE), the US utilization module, the logistics and resupply module (with JAXA), the US habitation module (HALO), and the Orion crew module. ESA is set to provide the international habitation module (with JAXA), the Esprit module, and the Orion service module. CSA is providing the robotic multifunctional arm, and Roscosmos (Russia) is set to provide the multi purpose module, called the “crew airlock” in some illustrations. (Whether recent tensions due to Russia’s invasion of Ukraine will delay or prevent this contribution remains to be seen.)

NASA says that the Artemis Base Camp and the Gateway in lunar orbit “will allow our robots and astronauts to explore more and conduct more science than ever before.” “Conduct more science?” Sounds good! There’s always some dang science that needs conducting. So when can we get this done, and how much is this program actually going to cost?

What is the Lunar Gateway Program timeline?

Unlike in the 1960s, when the USSR (Russia) and USA were fully embroiled in the Space Race and Uncle Sam was fully committed to getting a man on the moon before anyone else, today there isn’t a people’s (or government) mandate to spend unlimited gajillions of dollars to build this Moon base and orbiting space station.

However, the Artemis/Lunar Gateway program is one of the most aggressive plays from NASA in a while, and it’s a romantic-enough notion that it may earn the mandate of the people, if the people can manage to get off of TikTok for a few minutes and pay attention. There’s definitely growing pressure – prompted in no small part by China and Russia teaming up to build a moon base – to get back to the moon and establish a permanent presence there.

Spaceflightnow says, “The Trump administration set a 2024 schedule goal [see below] for the first astronauts to return to the moon’s surface in NASA’s Artemis program. The Biden White House has said it supports the Artemis program, although the new administration has not said whether it will stick with the 2024 schedule, which was already facing stiff technical and funding headwinds before President Trump left office.”

To us, this sounds like governmentspeek for “We’ll see.” And “We’ll see” has a way of resulting in protracted timelines and massive changes to budget constraints. However, as you can read below, the Biden administration’s requested budget for 2023 includes a hefty boost in funding for NASA.

The timeline for the Lunar Gateway program really began in December 2017, when President Trump announced that the USA was going back to the Moon.

A year later in December 2018, NASA announced that they planned to work with private companies to develop components to make a Moon landing possible in 2028.

In March, 2019, Vice President Pence spoke at NASA and said that they needed to do better, and pushed for a 2024 Moon landing date.

In April, 2020, NASA announced that three companies would be vying for the contract for the human lander: SpaceX, Blue Origin (and associated companies), and Dynetics.

In April, 2021, NASA revealed that SpaceX was its choice to move forward with the design, and awarded Elon Musk’s company the $2.89 billion contract.

But it doesn’t end there. Remember what we said above protracted timelines?

As noted above, in today’s political and economic climate, NASA doesn’t have a blank check for completing the Artemis/Gateway project, and it’s unlikely that the USA’s citizens would support the needed, enormous .gov support. This is one of the reasons why NASA has elected, in part, to use civilian contractors or businesses to achieve its goals.

This can have benefits and downsides. On one hand, civilian organizations may be more free to develop out-of-the-box concepts and ideas than government agencies that can be hindered by entrenched bureaucracy and political infighting. On the other hand, civilian businesses aren’t free from intrigue and infighting and… lawyers.

After NASA announced SpaceX as the winner of the lunar human lander contract, Jeff Bezos’ rival space company Blue Origin (as well as Dynetics) filed protests with the Government Accountability Office (GAO). SpaceX was ordered to stop work on the project while the protests were examined, but in July 2021, the GAO announced that it had found that NASA had not acted improperly in choosing SpaceX as the winner of the contract.

Shortly thereafter in August 2021, Blue Origin filed a lawsuit in Federal court, (which it has since lost).

Of course, whenever the courts get involved, you can expect delays, but it seems possible that the primary reason behind any perceived delays may have simply been the Trump/Pence administration’s unrealistic stated timeline in the first place.

Inverse reports that initial expectations based on then-President Trump and Vice President Pence’s statements were wholly optimistic. NASA administrator Bill Nelson said that the Gateway launch was not only delayed by up to 7 months by the Blue Origin lawsuit but he “blamed the Trump administration for the delay, as the ‘target of 2024 human landing was not grounded in technical feasibility.’”

Whether the initial date of launch set by Trump/Pence was unrealistic, or whether the lawsuit combined with the lingering supply-chain effects of the COVID-19 pandemic are to blame, the first piece of the Gateway is now set to launch “no earlier than 2024.” Actually landing people on the Moon (which will, per Artemis’ statements, include the first woman and first person of color on the Moon) will very likely come significantly later than that.

What is the budget for the Lunar Gateway Space Station Program?

As you can imagine, whenever human beings get together to launch big, heavy stuff into space, particularly to the Moon or other planets, the costs can be, well, astronomical. A total final budget for the Lunar Gateway program is unknown, because the timeline and the scope of the project keeps changing. When all is said and done, the final dollar figure will likely have ten or even eleven zeros after it, but we do know that NASA’s contract with SpaceX for the launch of the first two essential elements of the Lunar Gateway (the PPE and the HALO) is for $331.8 million.

We also learned in March 2022 that the Biden administration is requesting $26 billion for NASA for 2023, including $7.5 billion for Artemis and $779 million for the Lunar Gateway. That’s just for the next fiscal year, remember.

And this scale of spending on this project has been going on for years. Spacenews reported in 2019, “The fiscal year 2020 budget request, released March 11, seeks $821 million for continued work on the lunar Gateway, a project previously known as the Lunar Orbital Platform-Gateway and the Deep Space Gateway. Congress allocated $450 million for the program, which it called the Lunar Orbital Platform, in the final fiscal year 2019 appropriations bill signed into law Feb. 15.”

One source reports, “On 5 June 2020, Northrop Grumman Innovation Systems was awarded a contract, by NASA, of US$187 million to complete the preliminary design of HALO. On 9 July 2021, NASA signed a separate contract with Northrop for the fabrication of the HALO, and for integration with the PPE being built by Maxar, for US$935 million.”

In short, according to one auditor as reported by CNBC at least, the Artemis/Gateway project “will cost taxpayers billions more than projected,” and the Inspector General’s recent audit of Artemis found $40 billion has already been spent on the program. NASA is “projected to spend $93 billion on the Artemis effort” through 2025.

Big, biiiig numbers. But just for perspective, we’d like to point out how much the Apollo program cost: If you include Project Gemini and the robotic lunar program that enabled Apollo, all told we spent $28 billion the last time we got serious about sending men to the moon. That may sound like chump change until you adjust that number for inflation. In today’s dollars, it would be $280 billion.

By that measure, Artemis/Gateway starts to seem like an absolute bargain.