Your ultimate guide to the F-14 program 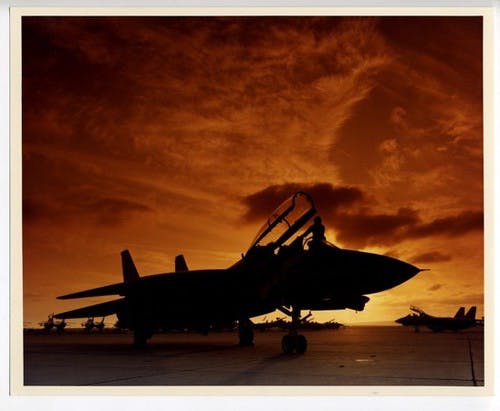 With the release of Top Gun: Maverick, there has been a renewed public interest in military fighter aircraft (particularly the new film’s featured plane, the F/A-18 Super Hornet) and the pilots who fly them. But today there are a lot of other distractions and demands on people’s attention. Thousands of TV channels. Socioeconomic turmoil. The internet. Smartphones. Soda chugs. If the success of TikTok is any indication, people now have the attention span of squirrels.

However, the impact of the original Top Gun movie (1986) on public interest in naval aviation could hardly be overstated. And the F-14 Tomcat was the undeniable technological star of the film, depicted performing incredible feats of aerobatics and explosive combat that blew the minds of ‘80s viewers. Calls to Navy recruiting offices were boosted in some areas, along with (we presume) sales of tanning oil, volleyballs, leather flight jackets, and Kawasaki GPz900 Ninja motorcycles.

So let’s go retro and outline a brief history of the vaunted F-14 Tomcat. Talk to me, Goose!

What was the F-14 program development timeline?

The F-14 program began in earnest in 1968 under the Navy’s request for the VFX (Navy Fighter Experimental) to replace the failed navy version of the F-111B. The Navy had been looking for a new, higher-performance, tandem-2-seat fighter/interceptor capable of delivering (and safely landing on a carrier with) the heavy, expensive new weapons systems, such as the radar-guided AIM-54 Phoenix missile, along with its AWG-9 radar.

(Interesting side note: A year earlier, as globalsecurity.org reports, “Grumman Aircraft Engineering Corporation submitted an unsolicited aircraft proposal to the Navy. Subsequently, the Chief of Naval Operations recommended a study be made to determine the feasibility of the VFX design. The Navy Fighter Study (NFS) concluded that the new fighter design was feasible and the Navy obtained authority in June 1968 to proceed with [VFX] Contract Definition.” THAT’s how you get ahead in the military-industrial complex, folks… confident self-promotion!)

Five VFX design concepts were submitted by Grumman, General Dynamics, Ling-Temco-Vought, McDonnell Douglas, and North American Rockwell, only one of which didn’t have the “variable swept wing” that became the F-14’s most recognizable feature.

In January 1969, Grumman’s design was declared the winner (though with a single vertical stabilizer, rather than the eventual twin-stabilizer design) and the first F-14 prototype took flight, incredibly, less than a year later on December 21, 1970.

It’s hard to think of a modern-era aircraft that went from concept to flying prototype in less time. To be fair, the Navy had awarded Grumman a contract to study advanced fighter designs in 1966 due to the ongoing troubles with the F-111B’s initial performance, and certainly this knowledge was applied in the development of Grumman’s VFX concept.

The speed of development was prioritized further as the Navy contract included penalties on the project if Grumman failed to achieve the contract guarantees:

Fortunately, Grumman delivered the F-14 on time, at cost, and with even better performance than was specified in the contract.

The F-14 was first deployed in 1974 with the U.S. Navy, replacing the McDonnell Douglas F-4 Phantom II (as well as the failed F-111B prototypes mentioned above). The F-14, and resulting improved variants, served as the U.S. Navy's primary maritime air superiority fighter, fleet defense interceptor, and tactical aerial reconnaissance platform until September 22, 2006, when the F-14 was retired from service by the Navy, and replaced by the Boeing F/A-18E/F Super Hornet. (The F-14 remains in service in the Iranian air force, however.)

What was the budget of the F-14 program and how much does each aircraft cost?

It’s difficult to nail down program costs and unit costs in military/government contracts, since all parties are understandably cagey about how much they’re spending. The program estimates at the time range from a total cost of between $5.2 billion and $6.1 billion, with per-unit cost between $11.5 and $16.6 million (FY 1971 dollars).This was very close to the eventual per-unit cost of $16.8 million.

At the time, the F-14 was the most expensive general purpose fighter airplane in the world, though this price was not out of line with historical fighter aircraft costs.

Globalsecurity.org reports, “Analysis demonstrates that fighter airplane unit costs have grown at an average 13% per year since World War I. Three percent of that growth may be attributed to inflation. The remaining 10% reflected increasing technical complexity and sophistication. Historically, the General Accounting Office found that all major weapon systems have shown an average cost growth of 30% over the initial estimates. The F-4 experienced a 25% overrun in the R&D phase, and the F-14, 28%. Low initial R&D estimates are primarily responsible for such cost growth. . . . the GAO found an average 30% growth for all major weapon systems. Neither the F-4 nor the F-14 experienced the profound and crippling technical problems which often confronted and confounded the military in the development of other weapon systems.”

Since the F-14 served for so long, the commonly-cited answer to “how much does an F-14 cost” is $38 million. But the initial buy-in was only part of the price. According to aerospaceweb.org, “The primary disadvantage of the aircraft is not its purchase cost but maintenance expenses. . . . the life-cycle costs of operating and maintaining an aircraft far exceed the initial acquisition cost. These costs only grow as planes age and require increasingly more maintenance hours per flight hour. This trend has hit the F-14 harder than most of its contemporaries because of its complex airframe (including the variable-geometry wings) and harsh salt-air environment at sea. The F-14 [became] the most expensive aircraft to operate in the Navy inventory, requiring 40 to 60 maintenance manhours per flight hour. For comparison, the F-18 Hornet requires only 20 hours of maintenance and the latest F-18E/F Super Hornet requires just 10 to 15 hours. These high maintenance costs played a large role in the Navy’s decision to move the retirement of the F-14 up from 2010 to 2006.”

Aircraft geeks “feel the need… the need for speed!” and the F-14 delivers. The F-14 is much faster than the F/A-18 that replaced it, with a top speed of mach 2.34, while the Super Hornet only reaches Mach 1.6-1.8 depending on configuration.

Additionally, the Super Hornet is more agile, significantly less maintenance-intensive, and can carry around 20% more payload, with a nearly identical climb rate.

The F-14 has a brief, but prominent role in Top Gun: Maverik. We won’t spoil it for you, but suffice it to say that, although the old boi acquits himself well, it’s clear that the new generation of Navy fighter jockeys and wannabes will appreciate the advances in technology and performance that have been made over the past 40-plus years.

So, while we do miss the scissor-winged wonder from the totally awesome end of the 20th century (along with our glistening, beach-volleyball abs), we will have to concede that the Navy made the right call.