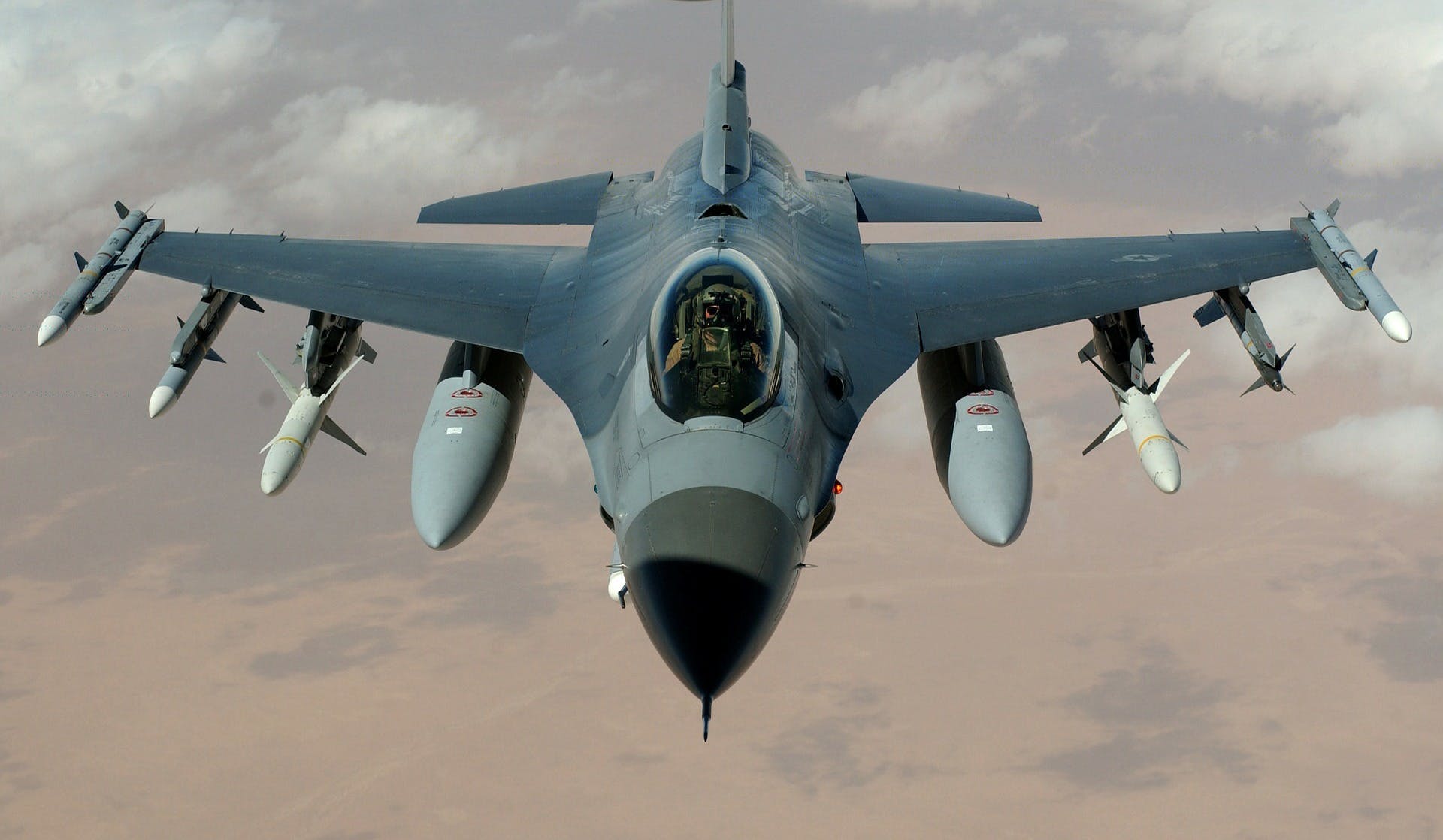 Let’s get one thing clear from the beginning: the F-16 Fighting Falcon is an awesome jet fighter. So awesome, in fact, that even after 40-plus years of military service (thanks to multiple updates and improvements), it’s still being built, and is still so good that the Air Force is hemming and hawing about replacing it outright.

The F-16 was such a technological leap forward in design and execution that it was head and shoulders above anything else available at the time, and competing aircraft designers had to play catch-up. All more recent multirole fighter aircraft vying for adoption by the United States and its allies must necessarily be compared to the F-16 as the gold standard.

The first fighter plane to use a “fly-by-wire” control system, where computers, electrical wires, and servos, rather than cables or direct hydraulics, transmit the pilot’s inputs to the aircraft’s flight control surfaces, the F-16 was so responsive and maneuverable that it required pilots to learn a whole new way of testing and flying it.

The F-16 was also one of the first aircraft that could withstand more G-forces than its pilot could–a full 9 G’s with a max load of internal fuel aboard. A fighter that’s so capable that it literally makes its pilots black out? How cool is that?? Let’s go over the basics of the F-16’s history, and then we’ll give you some bullet points that confirm the Fighting Falcon’s status as the ultimate badass jet fighter. 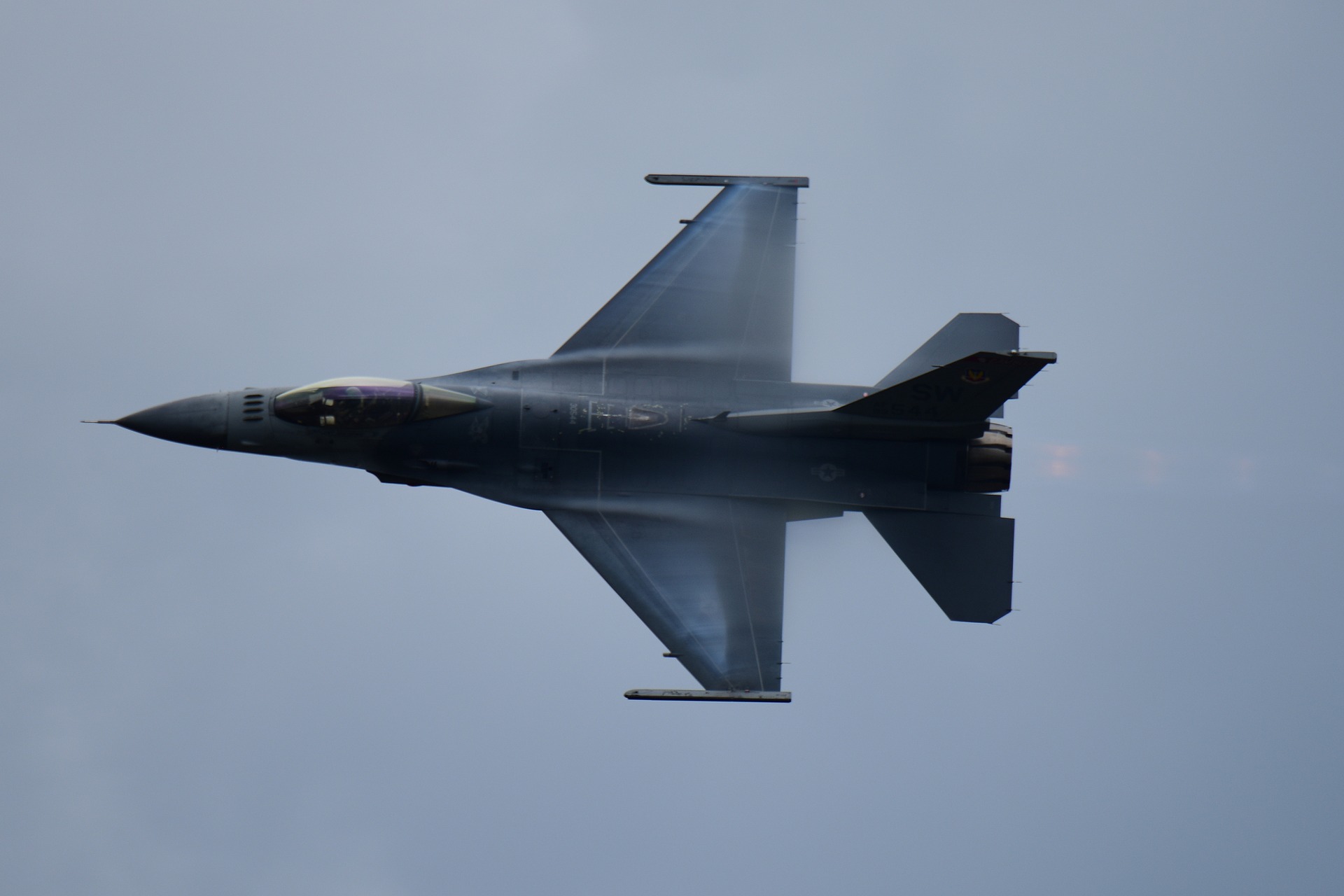 Which military branch commissioned the F-16 program, and what was the production timeline?

Like most projects involving multiple branches of the military combined with civilian companies and contractors, the origins of the F-16 program are a little messy. The seeds of the F-16’s eventual greatness were sown in the early 1960s by (then-Major) John Boyd and mathematician Thomas Christie, who developed the energy-maneuverability theory to predict or model a combat aircraft’s performance.

By the late 1960s Boyd had gathered a group of like-minded folks that became known as the “Fighter Mafia,” and were known for being very vocal proponents of their theories and desires regarding a new generation of light, powerful, highly maneuverable aircraft that could be built more cheaply and efficiently (at the time each generation of fighter aircraft was up to 10 times more expensive than prior ones).

The Fighter Mafia’s arguments and data modeling were compelling enough to secure U.S. Department of Defense funding in 1969 to develop and study design concepts based upon the energy-maneuverability theory.

Over the next several years, the Fighter Mafia’s core principles of “lighter, faster, and more maneuverable” were embodied after Boyd and his group pushed for military funding for prototyping and trials of 5 designs as part of the Lightweight Fighter (LWF) program. General Dynamics submitted their entry as the YF-16, and Northrop offered their YF-17.

These two aircraft were the two obvious standouts in the 1972 LWF trials, which were rolled into a broader-scope Air Combat Fighter (ACF) competition in 1974 in response to changing needs from NATO allies.

Interestingly, the Air Force initially didn’t see the *ahem* light, and argued against the YF-16 program, fearing that it would take attention and funding away from the F-15 Eagle. After the Secretary of Defense made it clear in 1974 that the ACF’s winner would be supplementally adopted in addition to the F-15, rather than replacing it, the Air Force’s opposition to the F-16 evaporated.

In head-to-head trials, test pilots unanimously favored the YF-16’s superior maneuverability compared to the YF-17, and in January 1975 the YF-16 was announced as the winner of the ACF competition.

The United States Air Force ordered both single- and two-seat configurations of the F-16 for full-scale development and production in 1975, and Belgium, Denmark, Norway, and the Netherlands also ordered planes. The F-16 “Fighting Falcon” first entered service at Hill Air Force Base as part of the 388th Tactical Fighter Wing in October 1980.

(The Navy’s ACF trial resulted in their purchase of the YF-17 for use by the Navy and Marines, which after the trials and further development would become the excellent F/A-18 Hornet and later the Super Hornet.)

In total, over 4,600 F-16s have been manufactured, and the Fighting Falcon is still being ordered and built for foreign military orders. In May 2021 the USAF awarded Lockheed Martin a $14 billion contract to build new F-16s for 5 countries through 2026.

What was the budget of the F-16 program and how much does each aircraft cost?

The initial budget of the F-16 program was $6.1 billion, though that had increased over 3-fold by 1981 (see below). As far as price per aircraft, the U.S. Government Accountability Office (GAO) reported in 1981 that “The F-16 program is generally progressing on schedule and meeting performance requirements. Its current program cost estimate per aircraft of $6.4 million (fiscal year 1975 dollars) is within its estimate of $6.7 million (fiscal year 1975 dollars).”

By 1981 the F-16 program’s parameters had been re-evaluated, and the U.S. Government Accountability Office announced that the program budget had increased from $6.1 billion to $18.7 billion “primarily due to a twofold increase in the quantity of aircraft to be acquired, higher than anticipated inflation, and a planned reduction in future production rates.” Incorporation of planned improvements would further increase program costs.

Due to inflation and multiple improvements to the aircraft, the price of an F-16 had risen from around $15 million in 1998 to about $30-35 million by 2017, depending on the variant and features desired. Different countries have paid more or less depending on the units/types ordered, political/economic conditions, and other factors.

Interestingly, the original $6.4 million per plane price in 1975 works out to about $33 million in 2022 dollars, so despite the improvements, the F-16 is still a relative bargain and the price hasn’t really risen in 47 years from a dollar-value perspective.

Like any new and innovative technology, the electronic “fly by wire” control system took some getting used to and had a few technical bugs to work out.

The first hands-on knowledge of the F-16’s new fly-by-wire control system was gathered on January 20, 1974, during a high-speed taxi test at Edwards Air Force Base. It was initially not intended to be a “first flight,” but, as Ron Burgundy says, things… escalated quickly.

Smithsonian reports, “General Dynamics test pilot Phil Oestricher applied what he thought were small control-stick inputs in the standard method used to check the airplane’s roll response. However, in response to the pilot’s input, the control stick in the YF-16, mounted on the right instead of the customary center, didn’t actually move. Instead, it measured the pressures exerted by the pilot’s hand and relayed that data, via electronic sensors, to hydraulic actuators in a newfangled fly-by-wire control system. The simulator Oestricher had flown didn’t adequately portray the stick forces, so he hadn’t learned to judge how much aileron he was commanding.”

The system’s settings were initially too sensitive to the test pilot’s inputs and the YF-16 rolled on its long axis, banging the right elevator on the tarmac and threatening to veer off the runway. Another source says that the plane oscillated wildly back and forth several times (remember this is still on the ground), and banged not only the elevator but also the Sidewinder missile, mounted to the end of the wing, on the ground. After several tense moments fighting the aircraft version of a “tankslapper,” Oestricher determined it would be safer just to take off, and went full throttle.

He conducted an otherwise unremarkable 6-minute test flight, landed safely, and General Dynamics, after making some adjustments to the controls (including a manual switch that lowered the sensitivity of the pilot’s inputs during takeoff and landing), scheduled the first official test flight for February 2, 1974.

Investigation into the close call determined that it “resulted from flying an antiquated flight test technique that didn’t work for a fly-by-wire system.” The report also stated that “mostly it was the fault of an overly-sensitive control stick setup, which caused Oestricher to get a full-rate roll every time he tried to stop the oscillation of the wings.”

The F-16 was a new technological approach to managing the critical interface between pilot and aircraft, and test pilots and combat pilots alike would need to put aside old ways of thinking.

Why the F-16 is the most kickass jet fighter ever

So, we’ve seen that the F-16 overcame some bumps in the road to becoming one of the most well-liked, capable, and prolific jet fighter aircraft in history. Now let’s go over some main points that make the F-16 such a fave.

The Navy also reports that “With a full load of internal fuel, the F-16 can withstand up to nine G's… that exceeds the capability of other current fighter aircraft.”

Our kind of people (read: engineers)  like to say things such as “function over form,” but who are we kidding? We all like machines that look cool and dangerous. While “Fighting Falcon” is the official name of the F-16, pilots and crews often call it the “Viper,” due to a perceived appearance to a sleek and deadly snake, as well as to the Colonial Viper space fighter from Battlestar Galactica (a television program popular around the time of the F-16’s rise to prominence).

As of 2015, the F-16 was the world's most numerous fixed-wing aircraft in military service, and many have been built since. An estimated 3,000-plus F-16s are currently operational, and the groundbreaking, adaptive, eminently effective Fighting Falcon looks to have a long life yet.