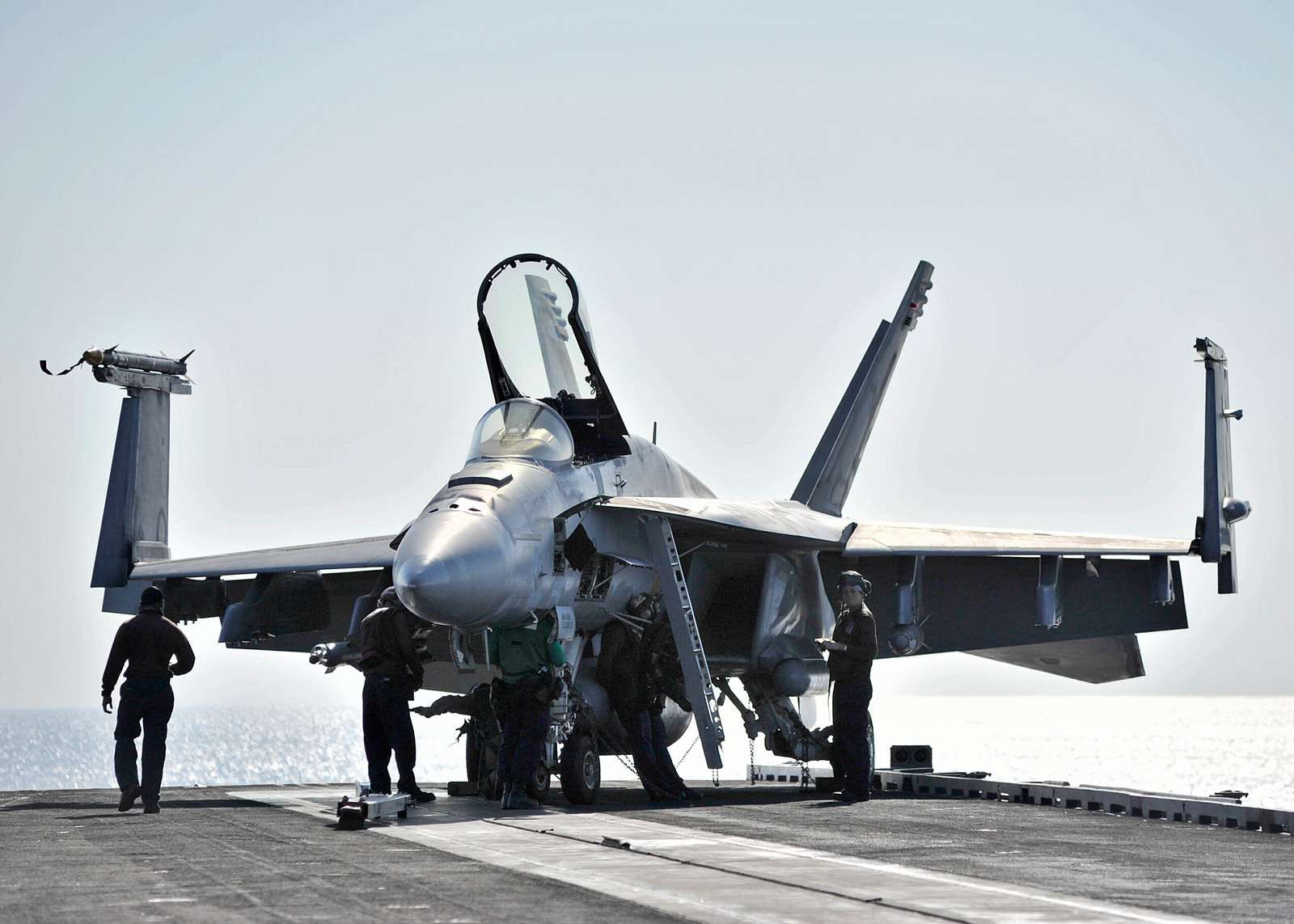 Whether you consider 2022’s Top Gun: Maverick as a sequel or a reboot of the iconic 1986 joint, there’s no question that the feel-good popcorn movie slash naval aviation recruiting vehicle is objectively a jaw-dropping blockbuster, earning (as of fall 2022) over $1.45 BILLION worldwide. That’s “billion” with a B, folks. The film is Tom Cruise’s biggest movie ever (earning the actor a cool $100 million), and has surpassed Titanic’s earnings to become Paramount’s highest-grossing movie domestically.

So why do we care? No, not because we’re fans of sweaty, shirtless, beach-football montages (and, well, who isn’t), but because one of the primary stars of the film (in addition to Cruise’s creepily youthful physique and Miles Teller’s creepily pubescent mustache) is the McDonnell Douglas F/A-18 Super Hornet fighter jet that, like Tom Cruise, has been kicking ass and taking names since 1983.

Let’s go over the history of the F-18 and learn how this versatile, excellent aircraft has kept itself relevant over four decades.

Origins and early history of the F-18 program

In the early 1960s, events were set in motion that would result in the eventual development of two iconic jet fighters, the F-16 Fighting Falcon and the F/A-18 Hornet. Major John Boyd and mathematician Thomas Christie, in response to the lumbering, crazy-expensive behemoths passing for fighter aircraft at the time, developed the energy-maneuverability theory to predict or model a combat aircraft’s performance.

By the late 1960s Boyd had gathered a group of engineers and designers known as the “Fighter Mafia,” and the group became somewhat notorious for being very vocal advocates of their theories regarding the need for the military to develop a new generation of light, powerful, highly maneuverable aircraft that could be built more inexpensively and efficiently.

The Fighter Mafia’s persistent arguments and data modeling were compelling enough to secure  Department of Defense funding in 1969 to develop and study design concepts based upon the Boyd/Christie energy-maneuverability theory.

Over the next several years, Boyd and his group continued pushing their mantra of “lighter, faster, and more maneuverable,” and the DoD approved military funding for prototyping and trials of 5 designs as part of the Lightweight Fighter (LWF) program. General Dynamics submitted their single-engine, single-horizontal-stabilizer entry as the YF-16, and Northrop offered their twin-engine, twin-vertical-stabilizer design as the YF-17.

These two aircraft were the two obvious standouts in the 1972 LWF competition, which was rolled into a larger-scope Air Combat Fighter (ACF) competition in 1974 in response to NATO allies’ changing requirements.

In the trials, test pilots reportedly favored the YF-16’s superior maneuverability compared to the YF-17, and in January 1975 the YF-16 was announced as the winner of the ACF competition. General Dynamics was given a military contract from the United States Air Force for full-scale development and production of both single- and two-seat configurations of the F-16.

For various reasons, the Navy often goes its own way where aircraft and equipment are concerned, and was more impressed with the YF-17 and its twin-engine, twin-stabilizer design. Experience had taught the Navy that when it comes to emergency procedures at sea, two engines are better than one. After all, you can’t simply glide to a safe landing if your only engine flames out over the Arabian Sea. The Navy purchased the YF-17 for use by the Navy and Marines, which after the trials and further development for carrier operations would become the excellent F/A-18 Hornet and later the Super Hornet.

What’s the difference between the original F/A-18 Hornet and the Super Hornet?

One of the reasons the F/A-18 Hornet concept has been so successful is that it was significantly redesigned and upgraded into the Super Hornet, which entered service in 1999. The last original-airframe-size F/A-18C/D aircraft were built in 2000. The Marine Corps flew its last F/A-18C mission in 2021.

The new Super Hornet single-seat variant F/A-18E and two-seat F/A-18F carry over the name and design concept of the original F/A-18 but were extensively redesigned by McDonnell Douglas, and depending on whom you ask, represent an essentially entirely new aircraft.

The Super Hornet has a new, 25% larger airframe, larger, rectangular air intakes, more powerful General Electric F414 engines, and an upgraded avionics suite. (Further upgrades have been made for the Block II and Block III variants over the ensuing years.) The Super Hornet is 7,000 pounds (3,200kg) heavier empty, and 15,000 pounds (6,800kg) heavier fully loaded than the Hornet. The Super Hornet has 33% greater internal fuel capacity. This, combined with larger wing surfaces, results in an impressive 50% increase in range over the original, smaller Hornet.

Like the Marine Corps’ F/A-18D Hornet, the Navy’s F/A-18F Super Hornet two-seater carries a naval flight officer as a second crew member in a weapon systems officer (WSO) role. Incidentally, while the exterior flying scenes in Top Gun: Maverick show the single-seat E variant in aerobatics and combat, the F variant was used to film the in-cockpit flying scenes, with the on-screen “pilots” being filmed in the rear seat and the actual Navy pilots flying from the front seat.

The Super Hornet is unofficially known as the “Rhino” in operational use. This name was applied to distinguish the newer Super Hornet variants from the legacy F-18A/B/C/D Hornet and avoid confusion during carrier deck operations.

Why the F-18 is still kicking ass 40 years later

We’ve talked about the Hornet/Super Hornet transition above, which is one primary reason the platform has remained relevant for so long. In addition, the Navy points out that the jet’s robust airframe was built with an “open mission systems architecture,” which enables ease of integration with new weapons and technology systems as they come along. Through incremental block upgrades, the Super Hornet has proven adaptable and capable of keeping pace with adversaries in today’s dynamic combat environment.

The latest iteration, Block III, delivers increased service life of 10,000 flight hours and presents a reduced radar signature, as well as benefiting from an avionics suite that brings the Common Tactical Picture into the cockpit. This includes an advanced cockpit display system with large touchscreen panels for improved user interface, and more powerful computing capability.

How much did the F-18 program cost, and how many aircraft have been built?

The Government Accountability Office (GAO) report from 1977 said that the Navy planned to produce 800 F/A-18 aircraft: 430 fighters, 310 attack aircraft, and 60 two-seat trainers. As the technology has evolved and new variants have appeared, the numbers get a little messier. For example, with the integration of the Super Hornet into the numbers, it can be tough to nail down how many of which variant have been built. However, GlobalSecurity.org says, “By 2014 eighty nine percent of the total F/A-18E/F procurement objective had been delivered (516 of 563).”

GAO reported that the F-18 program would cost about $13 billion for development and production, but that’s from the 1977 report. Depending on when those dollars were spent over the intervening decades, the actual adjusted dollar value could vary. $13B in 1977 equals about $63.5B today, so the total cost of the F/A-18 program, particularly considering the redesign/redevelopment costs of the Super Hornet, is likely somewhere in that ballpark.

So it appears that, at least for the US Navy, 2021 was the last batch of F/A-18s. Other nations will likely continue ordering the aircraft, perhaps at reduced prices as production ramps down.

How much does an F-18 fighter/attack aircraft cost?

Per the GAO report, “Unit procurement cost was estimated at $13.7 million on September 30, 1976.” Correcting for inflation to 2022 dollars, $13.7M in 1976 is worth about $71.3M today, which is amazingly close to the current price of the latest Super Hornet. As of 2021, if the Navy’s $1.76B reported purchase price of 24 F/A-18E/F Super Hornets is accurate, it works out to $73.3 million per copy. Since the Block II and Block III variants include significant upgrades, and the platform remains excellent and widely useful (especially considering the electronic warfare specialized EA-18G Growler variant), we’d say that’s a dang good price.

Some reports claim the F-18 platform is cheaper to maintain than even the already-frugal and durable F-16. The F/A-18 is most definitely cheaper to keep in the air than the F-14 Tomcat it replaced. The F-14 (star of the original Top Gun) was the most expensive aircraft to operate in the Navy inventory, requiring 40 to 60 maintenance man-hours per flight hour. For comparison, the F-18 Hornet required only 20 hours of maintenance and the latest F-18E/F Super Hornet requires just 10 to 15 hours.

That kind of efficiency keeps crews, admirals, and budgetary bookkeepers happy, so the aging-but-still-athletic F/A-18, like Tom Cruise, should still be blowing up bad guys in style for many years to come.