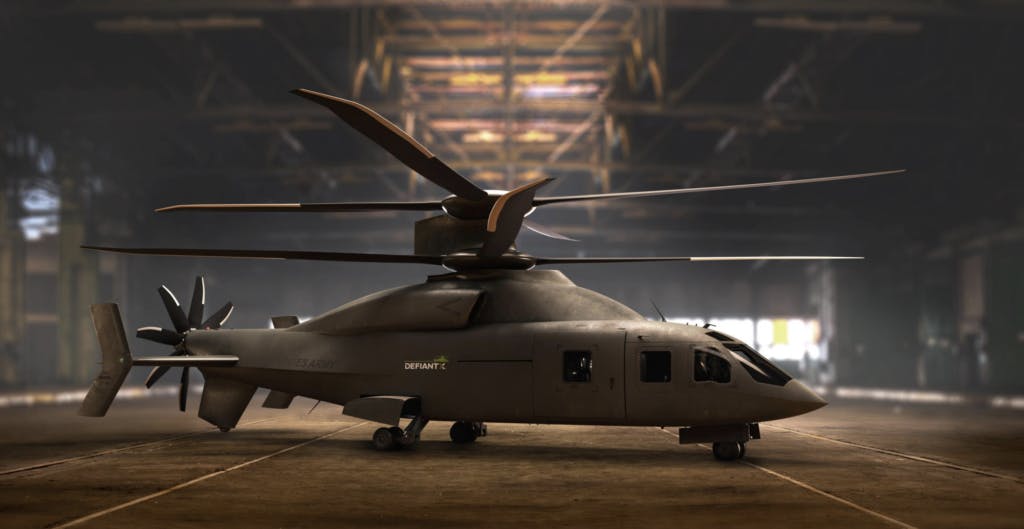 “Faster, higher, stronger – together” may be the new, kinder, gentler, solidarity-strong Olympic motto, but it could equally apply to the U.S. Army’s Future Long-Range Assault Aircraft (FLRAA) initiative.

The FLRAA program is currently (as of this writing, April 2022) in its final Competitive Demonstration and Risk Reduction (CDRR) phase to develop a kickass, multifunction, multi-branch rotary-winged aircraft (think “a helicopter with perks”) that can not only fly low, fast, and stealthy, but also carry more stuff farther, fly faster, fly higher, and get you and 12 to 14 of your tacticool buddies (along with lots of tasty snacks and fizzy drinks) to the hot LZ in comfort and style.

Let’s go over the history of the FLRAA program, the problems it intends to solve, and some other juicy details.

What is the Future Long-Range Assault Aircraft (FLRAA) program and which military branch is leading it?

Like the Future Attack Reconnaissance Aircraft (FARA) program, the FLRAA arose as part of the Future Vertical Lift program, which the U.S. Department of Defense had been considering since 2004 and which the Secretary of Defense formally initiated in 2009. The DoD and the Army had recognized the need for better performance, stealth capability, and range for the military’s primary rotary-winged aircraft, particularly in “hot and high” conditions like those encountered in Afghanistan. The Navy is partnering with the Army on FVL development and evaluations (see below).

Hot and/or high-elevation conditions are tough for rotary-winged aircraft like helicopters to deal with, since by the nature of their versatile design, they don’t fly fast enough to take advantage of the speed-related air compression that works so well in jet aircraft. The “wings” or rotor blades on helicopters rely on air density to create effective lift, and in hotter or higher climes that air becomes less dense, which can seriously impair combat performance.

The FLRAA and FARA designs, as well as the specific needs of the military and the budgetary environment, have evolved a little over the past 12-plus years, but there’s still an urgent need for completion of both programs. As we pointed out in our guide to the FARA program, the Army has stated that the Future Vertical Lift and related projects (FARA and FLRAA) “is the Army’s number three modernization priority overall and Army Aviation’s number one modernization priority.” (In overall importance to the Army, the FVL is preceded only by a Next-Generation Combat Vehicle and Long-Range Precision Fires missile). If anything, the FLRAA program is the more urgent need, since the aircraft it intends to replace is in near-ubiquitous use by all branches of the military, with eleven variants used by different organizations.

The FLRAA program intends to find a replacement for the Army’s UH-60 Black Hawk medium-transport helicopter, as well as the Navy’s NH-60R Seahawk and potentially any of the other 10 variants mentioned above. Whether the US Coast Guard’s aging MH-65 Dolphin helicopter fleet will also benefit from the FLRAA-related upgrades is unclear, but the USGC is already struggling to keep its fleet in the air, so here’s hoping they can figure out a solution, and the sooner the better.

However, the Army isn’t just looking for a replacement for the Black Hawk… it’s looking for a “game changer.” The Army Times reports, “The Army’s Future Long-Range Assault Aircraft is one of those transformational modernization programs that will provide a game-changing capability the Army does not have today. The FLRAA program will provide the Army with the ability to fly faster, go farther and potentially carry more payload than traditional helicopters today, specifically the UH-60 Black Hawk it looks to replace. This is a game changer not only for the aviators, but for the ground force commanders.”

What is the production timeline and budget for the FLRAA program?

The total program budget for the FLRAA specifically is difficult to nail down, since it developed relatively recently as part of the FVL program, and the military has had a hard time in recent years getting its budgetary needs met. But the FVL (which is currently focused on just two programs: the FARA and FLRAA) was allocated around $800 million in 2020 and has been budgeted $3.9 billion for 2021-2024.

We also know that the Army’s initial development contract with Sikorsky-Boeing was worth $97 million, and Bell’s contract was $84 million. However, in 2022, the Army awarded $577 million in contract modifications to Bell and Sikorsky-Boeing to perform work on the second phase of the CDRR effort for the FLRAA program. The Army Contracting Command awarded a $292.6 million modification to Bell and $284.4 million to the Sikorsky-Boeing team and obligated $19.5 million each in FY2021 research, development, test and evaluation funds at the time of award.

At present, the production timeline for the FLRAA program looks like this:

As for what’s happening in 2022 and the next several years, there are a couple of optional paths, as Defense News points out:

“The Army provided two schedules to get through the design and prototyping phase in an RFI in May to gain industry feedback. The first schedule lasts 52 months, putting the end of the prototyping period somewhere in the ballpark of early summer 2026. The schedule allows for a preliminary design review for just the air vehicle from the winning team — picked in the second quarter of FY22 — eight months after the contract award.

The team would then have another preliminary design review for the weapon systems 17 months past contract award, which roughly falls around August 2023.The Army would hit the engineering and manufacturing development phase around October 2023, followed by a critical design review in early 2025. The first prototype would be delivered in the summer of 2025, with five more prototypes delivered through the summer of 2026.

The alternative schedule would allow for a preliminary design review for both the air vehicle and the weapon systems at the same time at roughly 10 months following a contract award. This approach aims to get to an engineering and manufacturing development decision around March 2023. A critical design review would follow at the start of 2024, with a first prototype delivery expected around February 2025. All six prototypes should be delivered to the Army by roughly March 2026. The total time frame for the second option is 48 months post contract award.”

What are the two final designs in the FLRAA development program competition?

In March, 2020, the Army announced the two winning designs that would compete for the final military contract for the FLRAA: the Sikorsky-Boeing group’s SB-1 Defiant and the Bell V-280 Valor.

The Defiant (trademarked as the DEFIANT-X™ at the moment) looks to most non-aircraft geeks (a group of which we are proud members) like a traditional helicopter, but there are several key differences for those who look closer. Instead of a single, four-or five-bladed main rotor and vertically/trans-axially oriented tail rotor like the vast majority of contemporary helicopters, the Defiant uses two “stacked” contra-rotating 4-blade rotors (which negates the need for a traditional stabilizing tail rotor) and adds a rearward-facing, axially oriented “push rotor” for additional speed and range capability. The standard “medium transport helicopter” version of the Defiant has a crew of four and carries up to 12 combat troops. It can (ostensibly) reach speeds of up to 250 knots (287 miles an hour), more than 100 miles an hour faster than the current UH-60 Blackhawk.

Popular Mechanics points out, “The Bell Textron V-280 Valor, on the other hand, is a tiltrotor design much like the current V-22 Osprey. The V-280 improves on the V-22 concept slightly—while the Osprey rotated its entire engine nacelle to switch between helicopter and fixed-wing aircraft flight modes, the V-280 merely rotates the forward third of the nacelle where the large, oversized rotors are located. The V-280’s top speed exceeds 300 knots (345 miles an hour), making it twice as fast as the UH-60M. Valor will have a combat range of 800 miles, which is more than double the Black Hawk’s range. Lastly, the V-280 will have a crew of 4 and can carry 14 passengers, three more than the Blackhawk.”

Purely based on the military’s previous problems with the Osprey, we’re speculating that the Army will likely lean toward the somewhat more traditional “helicopter-esque” design and performance of the Sikorsky design, despite the Valor’s greater speed and passenger capacity potential. The Defiant also has a narrower overall horizontal profile due to its stacked main rotors, which may help it maneuver into tighter spaces in the battlefield. But only time will tell, and we’re pumped to see the final results of the FLRAA program and how the winning design gets refined and implemented over the next few years.