Your ultimate guide to the next-gen jammer (NGJ) program 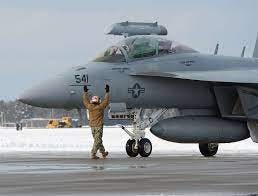 In our post-postmodern world where the iPhone in your pocket has over 100,000 times the computing power of the Apollo 11 spacecraft that landed men on the moon (and this computing power grows with each bi-monthly iPhone model release… what are we up to now, the iPhone 42?), you can imagine that the technologies and attack capabilities of the enemies of freedom have evolved, as well.

As the modern battlefield becomes even more digital, it’s clear that if you can disrupt the communication, navigation, or attack capabilities of an enemy by using electronic means, it can make the key difference in a conflict and can be even more effective than the employment of “traditional” weapons systems and tactics. This is the fundamental concept behind electronic warfare and the so-called “next-gen jammer” program that is currently in its final stages of development.

What is electronic warfare?

It might sound like the title of the latest Call of Duty game (or two children fighting in the back seat over a tablet), but electronic warfare (EW) is essentially any tactical action involving the use of the electromagnetic spectrum and/or directed energy to control the spectrum, attack an enemy’s assets, or slow or prevent enemy attacks.

The tactical use of the electromagnetic spectrum goes back to at least the early 20th century during the Russo-Japanese war of 1904-1905, where a Russian ship captain attempted to overpower a Japanese “wireless” (radio) transmission regarding the location of their fleet by requesting permission to broadcast a stronger signal. The Russian’s commander denied him permission to use this tactic, however, and the result was a devastating loss to Russia. (In fact they lost the war.)

Directed radar beams were used both to guide and disrupt the navigation of Allied bombers in WWII, and the use of EW tactics has skyrocketed from there.

What military platform is fielding the next-gen jammer?

Radar and radio installations were historically huge, and “jamming” technology was initially correspondingly immense. Mobile EW ground vehicles became commonplace during the cold war and are still in use in many countries, but for true battlefield superiority the next-gen jammer needs to be extremely mobile, relatively small, and, ideally, airborne.

The AN/ALQ-99 is an airborne electronic jammer system that was widely fielded by the U.S. over the past 50 years, typically installed in EA-6B Prowler and EF-111A Raven aircraft, and initially in the EA-18G Growler electronic warfare aircraft, a specialized variant of the U.S. Navy’s and Marines’ excellent F/A-18 Super Hornet fighter/attack jet.

In addition to the EA-18G, the Marines are considering supplementing their EW capabilities with F-35s that have stealthy NGJ pods attached.

The need for a next-generation jammer

By the late 1990s, the ALQ-99’s durability and capabilities had proven to be limited, having seen service since the Vietnam War, and one source points out, “The poor reliability of the ALQ-99 and frequent failures of the Built-In Test (BIT) have caused crew to fly missions with undetected faults; the ALQ-99 also interferes with the aircraft's AESA [Active Electronic Scanned Array] radar, reduces the top speed of the aircraft and imposes a high workload on the two-man crew when employed in the EA-18G Growler.”

Since technology keeps advancing at an exponential pace, the US military saw the need for a “next-generation” jammer system with increased range, reliability, and capabilities, and began seeking its development in the first decade of the 21st century. The latest versions of the NGJ are typically installed in “pods” hanging below the wings of the EA-18G Growler or can even be installed in pilotless drones with a few modifications.

Capt. John Bailey, program manager of the Navy’s Airborne Electronic Attack Systems, said in 2016 that in terms of isotropic radiated power, the NGJ is “about 10 times the power of what we typically put out in the ALQ-99” with around “quadruple the number of assignments it can handle” as well as the ability to rapidly beam-switch from “target to target to target” nearly instantaneously.

The next-gen jammer program grew out of requests from the US Department of Defense and the U.S. Navy in the early 2000s to develop a replacement for the aging ALQ-99 EW system.

The latest chapter of the NGJ program has been a collaboration between the US Navy and the Royal Australian Air Force, who has contributed $250 million towards the project’s development and according to our sources, currently fields 11 EA-18G Growler aircraft (the only country other than the US to use the plane).

What is the production timeline of the Next-Generation Jammer program, and what is its budget?

On 30 September 2008, the United States Navy outlined the basic requirements of the Next-Gen Jammer and specified that the design be modular. By November 2009, the Navy selected and awarded development contracts of $42 million each to Raytheon, Northrop Grumman, and BAE Systems, and ITT-Boeing.

On July 8, 2013 Naval Air Systems Command (Navair) announced that they had awarded a $279 million technical development contract to Raytheon.

As the project evolved, it became a little messy, as these things tend to do. The more you learn about a problem and develop solutions, the more the design targets change, and additional development is required.

The first NGJ-MB (mid-band) pod was delivered to the Navy in July 2019 by Raytheon, who says “The NGJ-MB program completed Milestone C in 2021 and is now in the production and deployment phase.”

In December 2021, the NGJ Low Band development contract was awarded to L3Harris Technologies, but some interesting hairs have to be split on this part of the NGJ story. Which brings us to our next point.

Whenever Uncle Sam gets out his checkbook and requests development of new or improved military technology, weapons systems, or electronics packages, private and government contractors all scramble to compete. Competition breeds excellence, and of course the U.S. taxpayers deserve a fair contest.

Since contracts can mean hundreds of millions or even billions of dollars over the life of a project, competition is fierce, and protests can arise between competitive contractors.

On July 8, 2013 (as noted above) the Navy announced that the $279 million technical development phase of the NGJ contract had been awarded to Raytheon. However, BAE Systems submitted a formal protest of the contract, and shortly thereafter the Navy issued a stop-work order for Raytheon. The Government Accountability Office (GAO) upheld the protest, ruling later that year that they found the Navy used improper procedures to select Raytheon. The Navy examined the issue but has continued with Raytheon on this portion of the NGJ program.

Similarly, in December 2021, L3Harris Technologies was awarded a $496 million contract to develop and build the Next Generation Jammer-Low Band (NGJ-LB) program over competitor Northrop Grumman. However, Northrop Grumman filed a bid protest, which the GAO sustained, proposing that the Navy independently review the specifications to determine whether the recommendations [of an L3Harris potential employee who helped pen the design specifications] were consistent with the Navy’s actual requirements.

So, depending on what is discovered in these investigations, the NGJ Low-Band competition may soon see a “recompete” portion of the development process.

What does the NGJ do that legacy systems can’t?

The NGJ-equipped Growler provides selective, reactive, and pre-emptive jamming capabilities along with full-spectrum airborne electronic attack capability, including cyber attack capabilities, in which the AESA radar is used to insert specific data streams into remote systems. In the primary role of suppression of air defenses, these new NGJ-equipped aircraft will provide modified escort jamming from outside the range of known surface-to-air missiles and other attacks, and as noted above, can put out around 10 times the power of previous systems and can handle quadruple the number of targets.

Additionally, the NGJ pod can be set to operate independently of the aircraft's systems, automatically responding to identified threats, which frees up “bandwidth” for the crew of the aircraft. Another unique aspect of the NGJ is that its AESA array combines EW and radar functionality with coms and signals intelligence. Current AESA systems perform EW and radar tasks, but also handling SIGINT and serving as a communications array are new capabilities under the NGJ. And, as discussed earlier, the NGJ system can be installed on other aircraft such as remote-piloted drones with little modification.

But Forbes points out that the greatest capability of the NGJ may be reliability when compared to previous systems. “‘If you turn it on, it’s going to come on. It’s going to point where it needs to point and it’s going to be on-frequency,’ says Ernie Winston, Raytheon’s associate director for Electronic Warfare Systems and a former Growler electronic warfare officer. That kind of basic functionality has been a problem for the AN/ALQ-99 Tactical Jamming System.”

We just want to know if you can get Spotify on this thing!