BoreasX is the first microtube heat exchanger for space 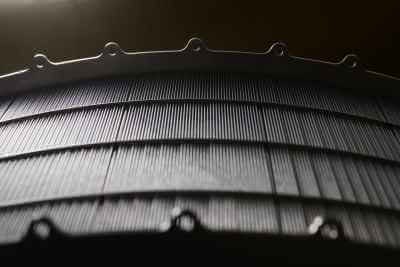 If you haven’t noticed, we’re living in the second Space Race. Nations are once again racing to plant proverbial flags on the moon, various levels of Earth-orbit, and even Mars and beyond.

This generation of space explorers will rely on far superior technologies to take them into space and bring them safely home. Problem is, decades of innovation at the space platform level haven’t necessarily led to downstream innovations in the supply chain. As a result, some constraining problems still exist because the enabling technologies were built to solve the problems of mid-century space platforms.

Today, we’re proud to unveil our first branded space product: The BoreasX Heat Exchanger, the first microtube heat exchanger developed specifically for stage-one rockets. We’ll dive into this bad mama jamma in a bit, but first let’s dig into the thermal challenges of getting spaceships off the ground, literally.

The challenges of thermal management for stage one rocket motors

How many times in your life have you heard someone say something similar to, “Look, this is just baseball. It’s not rocket science!” or “This isn’t rocket science… it’s just MRI-guided laser ablation brain surgery!” This is because, well, rocket science is hard.

There are so many complicated and expensive problems to overcome when putting people and technology into space that most countries on the earth don’t even attempt it (and even when they do, things can go wrong very quickly). One of the main issues, until someone invents an antigravity generator or a dilithium-crystal warp drive, is that the primary propulsion system for putting things into orbit, or getting them to other planets, is the multi-stage rocket design.

Our little blue planet still generates such a significant gravity field that it has proven exceedingly difficult to leave, and every successful space launch that has reached orbital speed has required the use of hugely powerful stage-one rocket motors as part of a multi-stage design.

These first-stage rocket engines, whether solid fuel, liquid fuel, or hybrid in design, have one thing in common: they are essentially controlled and redirected explosions that generate an enormous amount of energy and heat. Dealing with this heat and the potentially explosive and expensive problems it creates is at the core of successful space launches.

Since Intergalactic is dedicated to solving heat-related problems in all kinds of land-based and aerospace applications, let’s go over some of the core issues that a heat exchanger for stage one rocket motors must address to be successful.

1. Stage one rocket motors have to survive truly massive heat loads produced by the thrust required to achieve escape velocity.

The combination of pressures and temperatures typically reached in a rocket engine’s combustion chamber is extreme by any standard. In a jet engine, atmospheric nitrogen is present (in the air) to dilute and cool the combustion process. However, in a rocket motor, all fuel and oxidizers are self-contained (so they can function efficiently in a vacuum), and the propellant mixture can reach true stoichiometric ratios. This, combined with the high pressures generated, means that the rate of heat conduction through the walls of the combustion chamber is very high.

The heat generated by the rocket plume itself creates another set of heat-related problems.

The thrust chambers and nozzles of the Saturn V rocket, for example, were made of a nickel-based superalloy called Inconel X-750, which was designed to withstand temperatures up to 3,300 degrees Celsius (6,000 degrees Fahrenheit).

One study funded by the US Department of Energy’s National Nuclear Security Administration says, “To date, there still remains uncertainty in the full definition of the thermal environment created by the plume of a firing… rocket motor. Outside of the propellant plume, there can be intense thermal loading to nearby objects which are within the line of sight of the plume or in proximity to the exhaust gases. Examples might include heat flux to a soldier while firing shoulder mounted rocket launchers, or to the crew and launch platform for mobile rocket launch systems.”

Studies on rocket motor heat flux show that convection is the dominant mode of heat transfer for non-metallized solid propellants to the thermal insulators, whereas conductive (for liquid-fueled designs) and radiative modes contribute simultaneously to transfer heat to thermal insulators from propellant combustion.

In a liquid-fueled or hybrid rocket design, the combustion chamber, where the fuel and the oxidizer mix, must necessarily be insulated extremely well (which adds complexity and weight). In a solid-fuel rocket, the entire center cylindrical hole up through the center of the propellant acts as the combustion chamber, which spreads that intense heat load along the entire length of the rocket engine. Shedding this heat and dealing with it effectively is a primary concern for designers of aerospace heat exchangers.

2. Stage one rockets must deal with polar temperature extremes.

Popular and successful stage-one rocket designs, including the “reusable” technology developed by companies like SpaceX, are often liquid-fueled. Liquid oxygen, frequently used as an oxidizer in liquid-fueled rockets, has a boiling point of −182.96 °C (−297.33 °F) at 15 psi. Liquid hydrogen is even colder, with a boiling point of –423 ºF or –253 ºC.

Thus, stage-one rocket motors–as well as any heat-exchanger or heat-shedding technology associated with them–must be able to withstand both extreme cold from the liquid fuel/oxidizers as well as extreme heat from the combustion and exhaust.

3. Stage-one rocket motors and associated thermal management solutions must be extremely robust due to the tremendous amount of vibration.

Space launches are extremely violent, even when everything goes right. The noise alone can reach over 200 decibels (NASA is often cited as recording the Saturn V launch at 204db) which is well over the threshold at which human eardrums rupture. That’s just from the sound.

(Less-reliable sources claim the Saturn V launch “measured an incredible 220 db, loud enough to melt concrete just from the sound,” and “The launch of a Saturn V rocket, for example, produces around 220 decibels, which ignites grass a mile away with the sound alone.” Wow. The internet knows everything. *cough*)

Regardless, the noise and vibrations generated by a space launch are, by any estimation, enormous. Astronauts have been injured by the vibrations produced by putting these machines airborne.

As we learned from the Challenger disaster, leaks are very bad, since fire and fuel are co-located. Any heat-exchanger design intended for single-stage rocket motors must be able to withstand intense scrutiny for leaks or other flaws.

This is even more important as reusable rockets have come into the fore. Companies like SpaceX have popularized reusable stage-one rockets, which means that all systems, subsystems, and components associated with these rocket motors must be extremely robust and have long lifecycles while performing in extreme environments (sometimes even lightning!).

As we pointed out in our article about microtube heat exchangers, in aerospace, literally every gram of weight and every cubic centimeter of space is examined, re-examined, scrutinized, and prioritized. So size and weight reductions in rocket motors and their associated heat-shedding technology are important despite requirements for extreme reliability and durability.

So, keeping weight and size to a minimum is extremely important for advanced heat-management systems for stage-one rocket motors.

How do microtube heat exchangers work on space platforms?

So, how does the BoreasX handle the massive thermal problems of stage-one rockets? The answer is in the materials and the tubes.

BoreasX is a modified design of our classic Boreas3 Heat Exchanger. Our patent-pending microtube technology is a step-change in the core thermal technology for aerospace applications. For decades, brazed plate fin was the leading heat exchanger technology by default, but it has significant disadvantages, including limitations in size, weight, and form factor.

BoreasX can be developed in any form factor and generally offers size and weight reductions of 2-3 times with no drop in performance, compared with plate fin technology. BoreasX can be built in an array of materials, including stainless steel, Inconel, and other high-performance alloys.

BoreasX comes in three versions off the shelf (Basic, Plus, and Pro), but we can also handle clean-sheet design. We want BoreasX on all the major launch platforms, so reach out if you’re in the rocket building business.

We’re not hard to find. Contact us here or email us at phonehome@ig.space.