Everything you need to know about cooling aircraft or spacecraft avionics 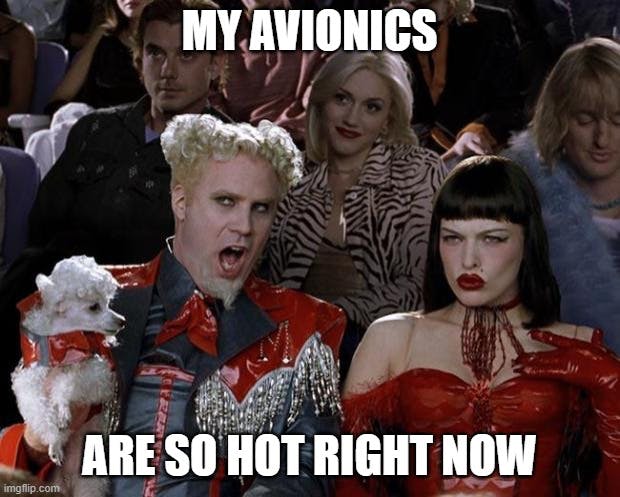 It might not seem logical that one of the primary heat-regulation issues faced by designers of aircraft and spacecraft is keeping avionics (the various electronic systems and equipment used in this discipline) cool. After all, space is cold, right? Aircraft move through the air (often very cool air) which can be used to cool various components, right? Well, it’s not quite that simple.

Let’s go over some of the thermal-regulation problems faced by aviation and aerospace engineers, and discuss the primary types of avionics-cooling methods and their advantages.

Why do avionics get so hot?

One of the main reasons aircraft avionics need effective cooling systems is that aircraft—particularly small private or commercial aircraft, but also many military aircraft—often have many windows and spend a lot of time sitting on sunny airport aprons, ramps, runways, and tarmac.

Aviation Today points out that there are few working environments that pose such an irritating problem as an aircraft cockpit, which is typically physically cramped but visually open, since the point of being airborne in the first place is to observe, in many cases. Aviation Today reported live testing of aircraft cockpit temperatures and pointed out the difficulties involved in cooling avionics:

“Because of their large overhead window areas, many cockpits suffer from solar accumulation, which causes heat-loading problems. Matte black cockpit surfaces act as near-perfect infrared (IR) accumulators. By midday, the IR accumulation, combined with the considerable internal heat generation from stack-mounted avionics and instruments, quickly raises the temperature of surfaces and areas behind the panels to dangerous levels. In small single-engine aircraft, heat also builds up because of conduction and reradiation from the front bulkhead and engine. These factors produce a hot ambient environment for avionics and instruments that can easily exceed DO-160D environmental specifications (high-temperature operating limits) before a system is switched on [emphasis added].

“Live testing shows the surface temperature inside a sealed aircraft cockpit parked on the ramp routinely passes the 60-degree C (140-degree F)-threshold of pain for human tissue. In southerly regions, the temperatures can reach a scorching 70 degrees C (158 degrees F), the upper operating limit for many avionics items.”

These problems are particularly sore for helicopters, which typically have more overhead glass (actually Lexan or Plexiglas, usually).

Of course, in addition to the “greenhouse” effect of the cockpit, the avionics themselves also generate a significant amount of heat, as does every electronic device. Due to the highly regulated, life-and-death nature of civilian private, commercial, and military aviation and aerospace, avionics are typically overbuilt and include redundant systems, which require more power and generate additional heat, and that heat is retained by the robust housings and anti-vibration materials required for sufficient durability.

In spacecraft, cockpits and habitable areas are necessarily heavily insulated both from the heat generated by launch (where applicable) and the intense cold of space. This insulation and air-tight construction means that any heat generated by avionics doesn’t have anywhere to go other than into the surrounding materials and the air inside the spacecraft, and in a sealed and well-insulated environment the heat of the avionics alone can quickly become a significant problem if not dealt with efficiently.

Let’s look at some of the most common methods for cooling avionics as well as their pros and cons.

Blowing cooler air over hot metal engines, components, and avionics is the “OG” aviation cooling method. (Or more accurately, moving the hot stuff through the air at high speed, creating the “wind” that cools the components via convection.) The vast majority of piston-driven private aircraft are still air-cooled to this day. Forced-air, or “ram-air” cooling designs are still sometimes used to cool avionics, and this is usually the least expensive and most durable option.

Fins are frequently used in this type of system to increase the surface area exposed to the cooling air. “Cooling fins” are common on aircraft engine cylinders, but are also commonly integrated into avionics housings, heat exchangers, and other components.

Depending on the design and application, cool air can flow through the system via open cowlings or vents, or it may be drawn in or accelerated via axial fans in forced-convection designs. In some cases, heat sinks can be used in conjunction with the avionics to increase the efficiency of heat transfer.

So the upsides of forced- or natural-air convection thermal management systems is that they are simple, reliable, durable, and inexpensive.

The downsides, however, can outweigh the benefits (literally, in some cases). The aforementioned heat sinks required for effective heat transfer can become so heavy and bulky that they defeat the purpose of the design in aerospace.

Furthermore, air—even fast-moving air—flowing over a surface can only remove so much heat. Today’s modern high-performance avionics generate a lot of heat, and air-convection thermal management systems are simply not up to the task in many cases.

An additional downside in this type of system is that introducing unfiltered ambient air into the system may not be ideal, particularly when keeping the interior components or personnel isolated from a potentially harmful external environment.

Aviation Today points out, “Cockpit airflow usually is not ideal for cooling. In fact, many consoles, radio stacks and control bays have no air exchange or cooling. They are sealed black boxes, absorbing and generating large amounts of heat . . . . Many aircraft struggle with ram air to cool overheated avionics stacks . . . . Larger aircraft are burdened with heavy and inefficient air conditioning, to try and reduce the accumulated high temperatures in flight. All of this is an attempt to reduce heat in an area that starts off far too hot at the beginning of almost every flight.”

As far as spacecraft avionics go, once a spacecraft is out of the atmosphere, cooling components with airflow is obviously a problem since, well… there’s no frickin’ air. So a better thermal management approach is needed for these applications.

Liquid-based thermal management setups utilize a closed-loop system in which a liquid is circulated either directly against/around the hot object or through a “cold plate” which is secured to the hot object. The cold plate often integrates or “sandwiches” a thermal interface material such as a thermal paste to more efficiently distribute heat from the hot avionics to the cold plate/cooling liquid. This liquid is then circulated through a heat exchanger.

The advantages are many: Liquid cooling keeps the cold plates and/or avionics at a relatively constant temperature in operation, which helps alleviate temperature spikes which are hard on components. Additionally, liquid-cooled systems are much more efficient at shedding heat from high-load avionics and other hot components. (This is one reason why automobiles, trucks, and motorcycles have become almost entirely liquid-cooled over the past few decades.)

Another advantage, particularly in space applications or environments where avionics may potentially be subjected to temperatures below their optimum operating parameters (such as aircraft stored in sub-arctic environments, etc.) is that a properly designed liquid-based thermal management system can potentially be used to both cool and heat avionics and components, depending on the ambient conditions and the desired result. With smart thermostatic valves and other intelligent control mechanisms, the thermal liquid can be used to preheat or maintain avionics at an appropriate temperature, reducing the time needed for pre-flight checks as well as increasing reliability by reducing or eliminating heat cycling of the components outside of a specified range.

One potential downside of the liquid-cooled system is that of increased complexity and added components compared to the simplest air-cooled thermal management setups. However, adding fittings that have the potential to leak, a heat exchanger that has the potential to become clogged or corroded internally, and the additional inspection/maintenance regimen required for the more complicated system is worth the tradeoff in greatly improved thermal management efficiency in nearly all cases.

Modern microtube heat exchangers have proven to be exceptionally reliable and efficient compared to legacy “plate-fin” liquid heat exchangers, and for their size and weight are two to three times more effective at shedding heat, while still maintaining the durability necessary for application on reusable stage-one rocket motors.