The thermal challenges of an outpost on the lunar surface 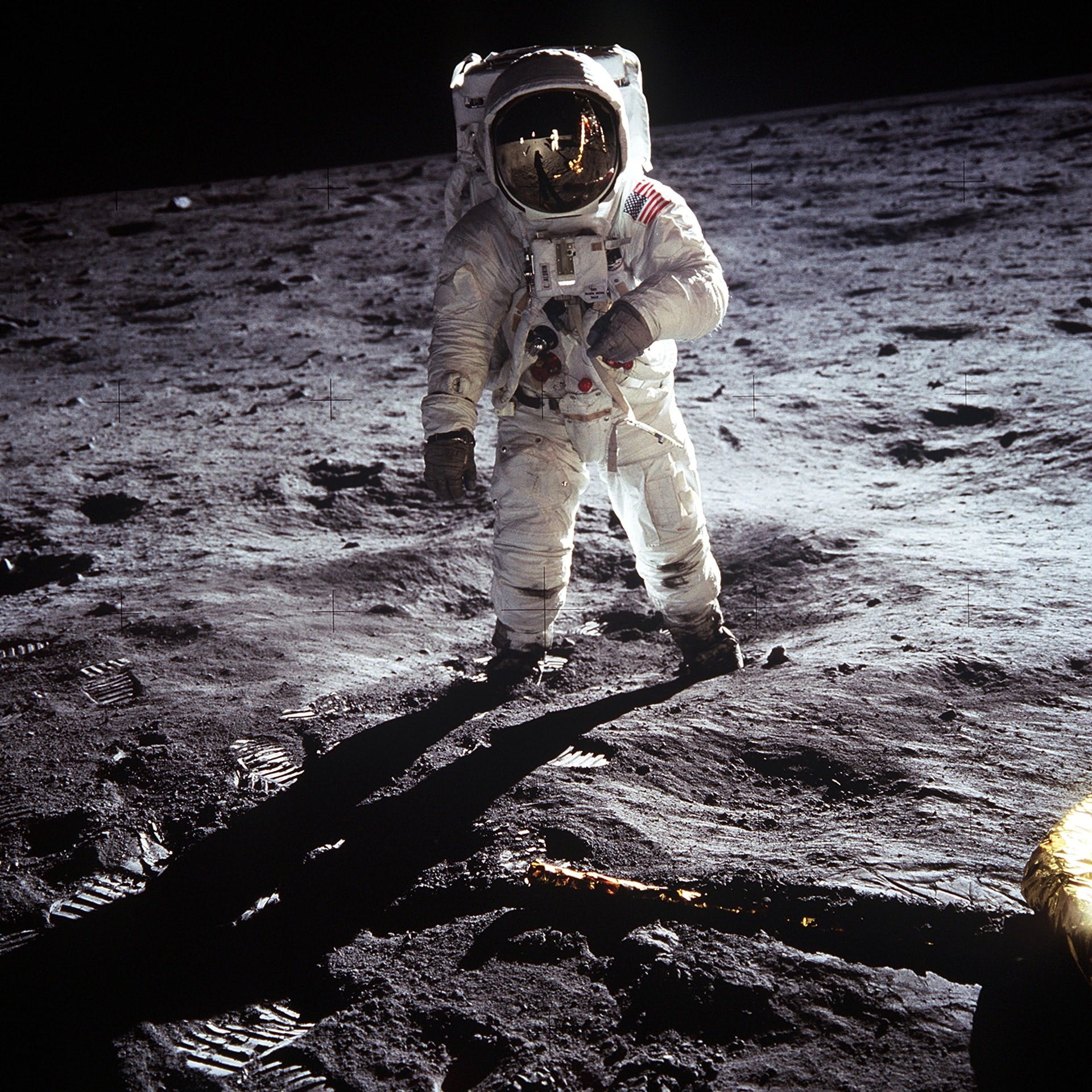 In the 1950s, everyone from science-fiction writers to grade-school teachers was convinced that humans would soon be living in awesome bubble-domed cities on the Moon. We’d be flying around in our George Jetson Moon cars, blasting Moon monsters with our Moon ray guns, buying Moon groceries with Moon rocks at the Moon market and generally having a pretty amazing Moon-centric time of it.

However, once we actually spent a gajillion dollars and overcame the nearly insurmountable technical hurdles to put a couple of dudes on the Moon, a bit of a reality check set in. The predicted Bradbury-esque launches of daily Moon shuttles didn’t materialize. The few Moon rocks the Apollo astronauts brought back didn’t reveal any hint of organic life, water, nor untold riches hiding beneath the lunar surface. And Earth’s governments seemed to develop a “been there, done that” attitude toward the Moon, and, as they typically do, turned instead to spending their time and resources creating lots of serious problems for each other.

Lately, though, we’re kinda having a renaissance of “let’s live on the Moon!” thinking. Whether this is due to a growing feeling of dissatisfaction with modern Earth life, or fears of overcrowding, or whether out-of-the-box thinkers’ proposed scientific research outposts on the Moon such as the Artemis/Lunar Gateway program are capturing the public imagination, the time is drawing nearer to when we may actually have a permanent lunar outpost in place.

Of course the theoretical, logistical, and practical problems of a long-term lunar outpost are innumerable, but one of the primary problems that most people don’t think about is that of thermal management. That is, how do we deal with the extreme temperatures, as well as the extreme temperature swings, on the surface of the Moon?

How hot, and how cold, does it get on the surface of the Moon?

Ask most people what the surface temperature on the Moon might be and they’ll likely say “Cold.” And they’re right. In the shade, surface temps on the Moon can drop to minus 280 degrees F (minus 173 C). Yep, that’s pretty frickin’ cold.

However, what most people don’t understand is that the surface of the moon can also be unbelievably hot. Like, hotter than any place on Earth (outside of an active volcano or a deep-sea hydrothermal vent). Surface temps of the Moon when sunlight hits it can reach 260 degrees Fahrenheit (127 degrees Celsius).

What is the reason for these temperature extremes? The most important factor is that the moon has no atmosphere. The Earth’s atmosphere, relatively thin as it is, acts as a thermal and radiation insulator, which helps keep the temperature within a habitable range for human beings (Death Valley and Antarctica notwithstanding).

Without this insulating blanket of air, and with the additional characteristics of low surface conductivity and high emissivity, the Moon’s surface, and any permanent lunar outpost placed there, is subject to these radical shifts in temperature.

As far as thermal management problems for lunar missions go, there are several advantages of a long-term or permanent lunar outpost compared to previous “lander” based missions. For a lander or “sortie” based lunar mission, a NASA report points out, “Each lunar rotation takes 28 Earth days, making it impractical to rely on thermal storage media. Additionally, the lunar regolith is composed of a statically-charged powder with high emissivity and absorptivity, which could greatly degrade the performance of any thermal system unless properly accounted for.”

However, a more permanent outpost would theoretically be able to rely at least partially on “thermal storage media,” heat sinks, and potentially the Moon’s regolith itself for some insulation from heat/cold as well as radiation. NASA says, “It will be possible to do more extensive work on the outpost thermal system . . . This could include burying the outpost in regolith for thermal insulation as well as for radiation protection. Building up regolith embankments along the sides of the outpost would protect it from the horizontal solar flux while still leaving the top exposed for ingress/egress or communications. An outpost not situated at a pole will experience a cycle with 14 days of daylight and 14 days of night. The changing environment could be partially mitigated by using heat storage materials. Unfortunately, the long period of rotation drives these systems to being (sic) very large.”

And this brings us to the crux of the biscuit, as Mr. Zappa would say: launching “very large,” heavy, bulky items into space is exceedingly difficult and expensive, and getting stuff all the way to the surface of the moon is exponentially more so.

Since minimizing components’ size and weight while maximizing efficiency is the never-ending mantra for missions to space, an ideal component for thermal control systems for all aspects of a mission to create and maintain a permanent lunar outpost would necessarily be a durable, versatile, lightweight, size-efficient, highly effective heat exchanger that could be used for both heating and cooling, and in both very hot and very cold environments.

Any thermal solution intended for use on launch vehicles, orbiters, landers, surface vehicles, or structures related to a lunar outpost must be able to withstand intense scrutiny for leaks or other flaws.

Obviously any heat exchanger intended for use on a permanent lunar outpost could not rely on a regular replacement schedule, and must be able to survive and remain functional for extended periods in conditions that are not encountered on Earth.

Intergalactic’s microtube BoreasX heat exchanger can be ordered in an array of highly durable materials, including stainless steel, Inconel, and other high-performance alloys that have been proven in space applications. In addition, unlike other heat exchanger designs, microtube heat exchangers can remain effective even with partial blockage of many of the tubes. (Note: BoreasX is optimized for rocket motors, but it can be modified for any space-rated thermal system that requires heat exchangers for thermal transfer.)

Any piece of equipment taken into space can be expected to have more than one job to perform, and ideally, multiple functions. And due to the very-cold-and-very-hot nature of the lunar surface, the ideal thermal solution would be extremely versatile and used both in cooling and heating the connected environment or equipment.

Potentially, astronauts (or whatever we’d call long-term lunar outpost residents) could transfer heat exchangers from launch vehicles to lunar landers to lunar rovers to lunar outposts as needed, since the size and weight of each exchanger would be easily manageable by the end user.

Intergalactic’s microtube heat exchangers are available in standard sizes and configurations (all exceptionally small and efficient for their dimensions) but customization is available and welcomed.

The BoreasX is a modified design of our classic Boreas3 heat exchanger. Our patent-pending microtube technology is a step-change in the core thermal technology for aerospace applications. For decades, brazed plate fin was the leading heat exchanger technology by default, but it has significant disadvantages, including limitations in size, weight, and form factor.

BoreasX can be developed in any form factor and generally offers size and weight reductions of 2-3 times with no drop in performance, compared with legacy plate fin technology.

Additionally, the microtube heat exchanger doesn’t have the downsides of the “traditional” spaceborne heat radiator, as discussed in the NASA report: “the IR load grows substantially faster than the solar load drops as the radiator is tilted off of the horizontal to reduce the incoming solar load. In addition, a small angular tilt could prevent heat pipes embedded in a large radiator from functioning in lunar gravity.”

The BoreasX heat exchanger was designed to function in zero-, normal-, and high-gravity environments, so such concerns would not be an issue.

We’re looking forward to seeing how NASA and commercial contractors solve the huge number of problems related to the establishment of a long-term lunar outpost. But as for how to keep it cool (and warm), we feel we’ve got that one in the bag.